Drummer Scott Rockenfield denies ever quitting, abandoning, walking away or retiring from Queensrÿche

Queensrÿche‘s long-time drummer Scott Rockenfield has finally spoke out publicly about his “status” in the band although he really didn’t provide much details aside that there will be “more soon.”

”Contrary to any statements or interviews coming from other parties, I most definitely ‘did not’ and ‘have not’ quit, walked away, retired or abandoned Queensryche??!! ….unfortunately, you have not been given the facts by any means…” 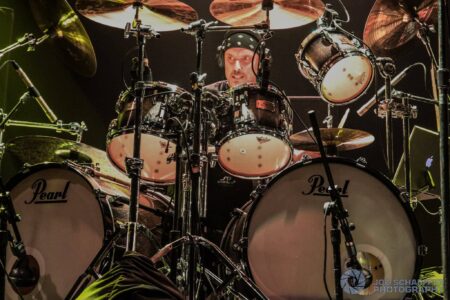 Rockenfield did not play on the band’s last studio album The Verdict.

To be fair to Queensrÿche, they have not taken the position that Rockenfield left but rather that he was just taking some time off. Back on February 16, 2018, Queensrÿche posted the following message in part on their Facebook page:

“And for those asking again about Scott and whether he has quit the band – he has not quit the band. He told us he’s taking time off and we have no time frame on when he will return. We thought he would take few months off, obviously he doesn’t want to tour right now. There is nothing more we can say about it and we can’t be more honest about it than that.”

In an interview with the Daily Boom in or about April 2019, Queensrÿche guitarist Michael Wilton commented as follows about Rockenfield‘s return to the line-up: “We don’t know. He is on a different path right now and raising a child so we’ll wait and see. The door is always open. People change and they want to do different things so they need some time and their privacy. Casey Grillo has been on tour with us for the last two years and he actually played drums on two of the extra songs included on our bonus CD. We did acoustic versions of “I Dream in Infrared” and “Open Road” and he did all of the percussion on both those. He’s a great drummer, really well-rounded and he has a wide palette in his musical style. He’s filling big shoes and he’s doing a great job. The fans really love him and he is scheduled to be on the road with us again this year.”