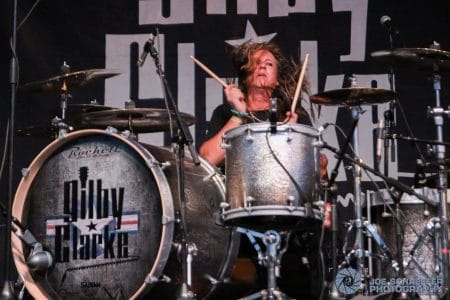 Farrell spoke about his time in former Warrant frontman Jani Lane‘s solo band including when he was fired from the group. When asked why he go fired, Farrell indicated (as transcribed by the Chuck Shute Podcast with slight edits): “I don’t know. I think I may have overstepped the boundaries one time. We played a place called the Webster Theater in Hartford, Connecticut [USA], which was a place I played with Dizzy Reed, [and] Alex Grossi [in] Hookers & Blow numerous times. It’s a legendary heavy metal rock bar. I mean, it’s actually not a bar. It’s a theater, you… probably 2,000 people. And we played there and, and I was really good friends with the owners and stuff ’cause I did a lot of the business with Hookers & Blow. So I knew those people. And that was how we played there all the time. And Jani went in there and he’s punching walls and he just wasn’t having a good time. And so I said something, and I’m like, ‘Bro, this is, this is my hood here, man. Don’t, you know, I wouldn’t go to your house and let my friends knock your walls. Like, come on man, you know, let’s try to make the situation a little bit better.’

And his girlfriend — or I don’t think they were ever married — Sheila, who I still talk to today. I don’t think she liked me very much ’cause sometimes, I get a big mouth, but I was like, ‘Hey man. Don’t come in here and do that. That’s not cool because you’re not going to hear about it. Maybe the management will hear, ‘Hey Jani‘s down.’ But you know, they’re going to come to me going, ‘Dude? What’s up with your singer guy? Tell Jani to not…’ You know what I mean? So I think I maybe talked too loud once and so yeah. So, Obi called me, [and] he’s like, ‘Hey man. We’re not going to need your services anymore.’ I’m like, ‘Oh wow. I think I just got fired from Jani Lane‘s band.’ But I was never the guy not showing up for the gigs. I made the plane ride every time. But I gotta tell you. The handful of shows we did back in ’06 were awesome. I mean, I was playing with the guy.”

You can listen to the entire interview with Troy Patrick Farrell on the Chuck Shute Podcast via the Buzz Sprout website.