Italian rockers, Drunken Rollers, have released a video for their new song “Climb The  Moutain” from their new album Boogie Generation, which was released and can be purchased via Perris Records. 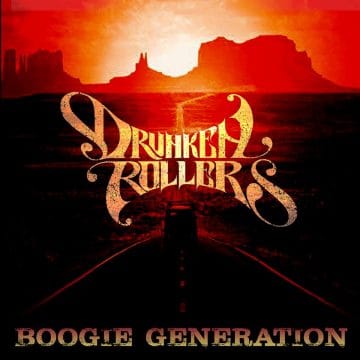 “After a year of jamming and playing rock n’roll covers in rehearsal studios, the Drunken Rollers began crafting an original sound and writing their own music. A few line-up changes and numerous concerts later, in 2012, DR recorded their first demo entitled “Chicken Run,” offering up hard boogie and alcoholic rock n’roll, with Laura Merciai on bass and Daniele Teghini on drums. The band gained traction playing many more live concerts around Tuscany including local festivals and motorcycle racing meets.

In 2014, the Drunken Rollers changed up the rhythm section welcoming Giacomo Barbari on drums and Roberto Lapucci on bass. With this new line-up, the band released their first, full-length album “Boogie Generation” with Perris Records on February 26th 2016. The new songs written during these years (2014-2015) speak of diverse events and personal experiences, including the time Lorenzo, “Braus” had his license confiscated during a roadtrip in the United States.

The Drunken Rollers mix blues and “ZZ Top boogie” with a dose of extra grit engrained in their roots thanks in part to grunge and British 70’s rock n’roll. In respect to their first demo, the DR sound has evolved into thumping hard rock with its rough-and-tumble guitars and cutting edginess.