DSP consisting of David ‘Scary’ Perry on lead vocals and guitar, Rhonda Roxx on bass and Thumper on drums have released a video for their song “Combinations.” 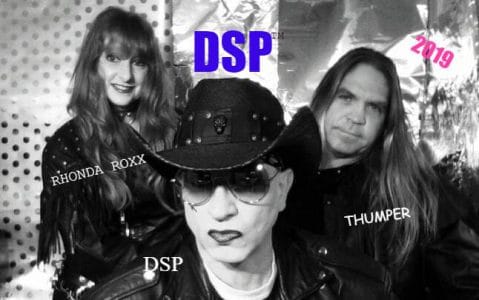 DSP‘s “Story” on their Facebook page indicates (with slight edits):

“David ‘Scary’ Perry is an accomplished musician and author. He set out on his journey with rock music sometime in the early 1980’s. His 1970’s fascination with theatrical bands such as KISS, Alice Cooper, plus the eighties Motley Crue, Poison era, and many other acts set up this creative brilliant rock musician. He than discovered his directional path of becoming a solo artist who today is known as the founder of DSP. Soaring rich lead vocals along with guitar brilliance produce one of the most tasteful enriched sounds in today’s rock music. Joining him are two incredible musicians Thumper on drums and Rhonda Roxx on bass. These two produce the driving rhythm section behind his live sound. All three make up the amazing original band DSP. We are here to rock you! This is the official Facebook Music/Author Page for DSP. Welcome~!”