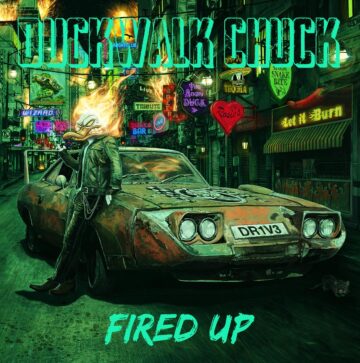 Norwegian rockers Duckwalk Chuck consisting of lead vocalist / bassist Arvid Thorsen, guitarists Håkon Rønneberg and Arild Rettore, and drummer Tord Eiken have unleashed a video for their single “Shut Your Lights” from their latest studio album Fired Up, which was released on September 17, 2021.

Sleaze Roxx stated the following in its review of Fired Up:

“Norwegian rockers Duckwalk Chuck are back — believe it or not — with their fifth album Fired Up after the release of Comin ‘Out Blastin’ CD (2004), Tombstone Stomp CD (2008), Rebel EP (2009) and High Speed City CD (2017). Once again and very similar to my experience with High Speed City, I was instantly hooked when I started listening to Fired Up. While there are still many Airbourne like similarities on Fired Up like on High Speed City, I found that there was also quite a Motörhead feel to a lot of the songs. If anything, I found that there was a real rough edge to the tracks this time around. Although the song quality tails off towards the end of the album, those first seven tracks on Fired Up with the exception of the slower “Rosie’s” really rock. And as I have listened to Fired Up more and more over the last two months (courtesy of an advance copy from the band), I have started to really even enjoy three of the last four tracks that I wasn’t as enthused about even though the quality does go down a notch.”