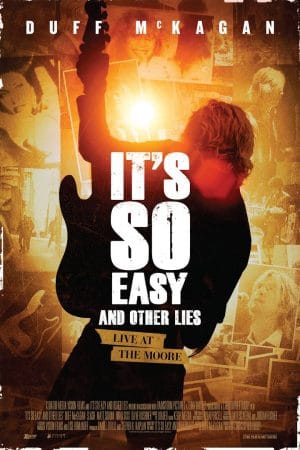 has announced today that this It’s So Easy and Other Lies, a documentary based on Guns N’ Roses bassist Duff McKagan‘s memoir, begins screening on Friday, May 27, 2016 at select theaters.

A promotional clip from the documentary has been released where Mötley Crüe bassist Nikki Sixx and Guns N’ Roses guitarist Slash are interviewed.

Sixx is seen stating in the documentary promotional clip: “So I went to see them and I said, ‘Wow! That’s the spirit. They’re playing from their heart.’ We said, ‘Let’s take these guys on the road. These guys will been great. They’re just like us. They’re coming up and let’s give them a break. Ozzy [Osbourne] gave us a break.'”

Slash states: “That particular tour was awesome. Two sort-of hell-raising bands from Los Angeles. One’s been successful for awhile, and one was on the way up. We were from the same gritty kind of street environment in L.A. and we knew each other, so it was just cool.”

IT’S SO EASY AND OTHER LIES Exclusive Clip – Motley Crue