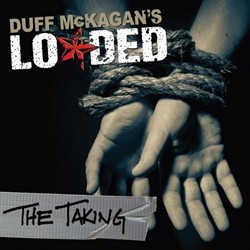 A Grammy and American Music Award-winning songwriter/recording artist who has sold over 100 million records, Duff McKagan helped shape the music of an entire generation. He was a founding member of Guns N’ Roses and Velvet Revolver, and formed Loaded in 1999. Though most widely know as rock’s premiere bassist, McKagan once again takes front and center on lead vocals and guitars. Long time Loaded members Jeff Rouse (bassist) and Mike Squires (guitar) return along with drummer Isaac Carpenter who joined in late 2009.

Recorded by Terry Date (Soundgarden, Avenged Sevenfold), the album follows the band’s 2009 debut Sick. A feature-length film, The Taking (in the style of A Hard Day’s Night crossed with The Song Remains The Same), is due this summer.

“This record really sort of took a life of its’ own, and the songs really revealed themselves to us as we went along,” says Duff. “Terry Date came into the picture at a time when his genius ear helped to capture a sonic theme for the record. You can’t underestimate what a guy like TD brings to the table. The Taking is the closest thing to a ‘concept’ record that I have ever been involved with. Pain, loss, triumph, and redemption. Life. Bring it.”

Fans have already been warmed up with tracks “We Win” and “Fight On,” (currently available here). “We Win” was played at Qwest Field, the home of the NFL’s Seattle Seahawks, McKagan’s hometown. It was also heard during the World Series on the MLB Network. Proceeds from downloads of “Fight On,” a song inspired by America’s military veterans, were donated to the Puget Sound Healthcare System veterans administration.