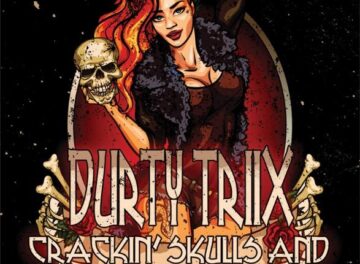 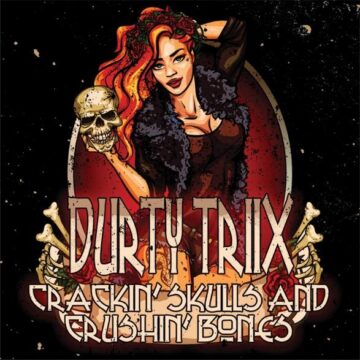 Durty Triix consisting of frontman Scotty Ginn, lead guitarist Dave McKeowen, bassist Damian MacDonald and drummer Jason MacDonald have unveiled a video for their opening track “Living In Danger” from their debut album Crackin Skulls And Crushin’ Bones, which was released back on October 7, 2022.

Sleaze Roxx stated in its review of Crackin Skulls And Crushin’ Bones: “In short and for me, it’s an album of two halves. The first being a rousing collection of rockers in various styles that would be a great addition to getting ready for a good night out. The second half suffers by comparison, in that the songs aren’t as instantly impressive and lessens the impact of the album as a whole. Of course, it may be that they will grow on you the more you spin the album, but several did come across to me as just included to complete the album which is a shame.

It’s produced nicely and the rhythm section of bassist Damian MacDonald and Rags ‘N’ Riches drummer Jason MacDonald are solid throughout, whilst lead guitarist Dave McKeowen is consistently excellent. Guitarist, lead singer and main man Scotty Ginn tempers his vocals to perfectly suit each track and he is particularly impressive on the sleazier tracks like “Miss Kitty’s Bar”. The harder edged spirit of 80’s rock is indeed embodied with relish and enjoyment here and, whilst for me personally, some of the later tracks weren’t as good as the earlier ones, there is still an awful lot to enjoy on this Durty Triix debut.”