Swedish rockers Dust Bowl Jokies have announced today that the band will be coming to an end with its last show at the Hard Rock Hell Sleaze Festival in Sheffield, UK on August 31, 2019. The group released two albums — Cockaigne Vaudeville (2013) and Dust Bowl Jokies (2016). 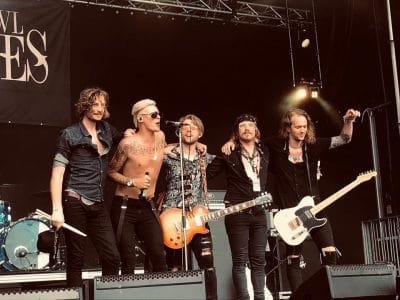 After a lot of discussions we have come to the conclusion of ending Dust Bowl Jokies.

There are no hard feelings between any of the band members and this decision is made together.

We would like to thank all of you that have supported us through out the years, but also former members Hampus, Nicke and Victor.

We are so happy to have toured and played nine countries, released two albums, and created all those stories along way.

We would also like to thank Jonte for helping us out with videos and for sharing love and laughter with us.

Hard Rock Hell Sleaze will be the last show Dust Bowl Jokies will do.

We are looking forward of seeing you in Maidstone July 20 and Sheffield August 31.

The band’s “Biography” on its Facebook page indicates (with slight edits):

“Formed in Sölvesborg, Sweden in 2011, Dust Bowl Jokies released their first album “Cockaigne Vaudeville” in early 2012. Produced by Nicko DiMarino and co-produced by Beau Hill (Alice Cooper, Twisted Sister, Europe, Gary Moore), the debut featured hit songs such as the anthemic ‘Boots On Rocks Off’, which gained traction on rock radio not only at home in their native Sweden, but also around the world in the USA, UK, France and Germany.

In 2013 they released a two-track EP, which included the songs ‘The Wicked’ and ‘Blood, Sweat & Perfume’. The release was welcomed with critical acclaim from across Europe, which led to the band embarking upon an extensive tour and their first appearance in the UK.

With new songs under their belt, the band teamed up with German record label Rodeostar/Steamhammer, and released their sophomore album ‘Dust Bowl Jokies’ on 22 April 2017.”