Swedish rockers Dust Bowl Jokies have released a new video for their song “Borderland” from their self-titled second studio album. 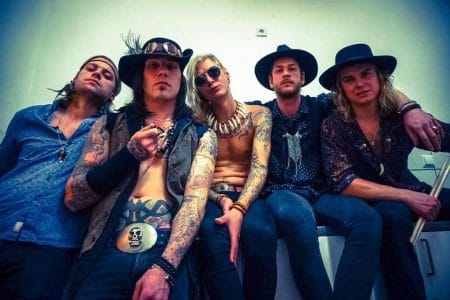 Sleaze Roxx stated the following in its review of Dust Bowl Jokies‘ self-titled album: “Dust Bowl Jokies (why do I want to call it “Junkies” instead?) starts off strong with “Mama Cocha” and keeps going with “Borderland” and “Pink Flamingos” among other strong tracks. This album is simply dripping in sleaze. It is very much a throwback to L.A. Guns‘ Cocked And Loaded. Polished, but with the attitude and aggression to pull off the genre.”

Since 2012, the band has played as many festivals and nightclubs possible and they recently released a two tracked EP including the songs “The Wicked” and “Blood, Sweat & Perfume” which got some great reviews from all over Europe.”