Swedish hard rockers Dynamite have announced that they have been working with songwriter Andreas Carlsson who has written songs with many pop musicians such as Britney Spears, Backstreet Boys, NSYNC and Celine Dion to name a few. Carlsson also has written songs with a few notable hard rock bands and/or artists consisting of Bon Jovi, Def Leppard, Paul Stanley (KISS frontman) and Europe. 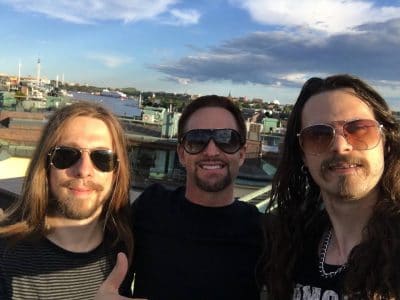 We are really proud to let you know that we had the privilege to work with Andreas Carlsson on our upcoming album. Andreas has an amazing resumé including writing songs for Paul Stanley, Bon Jovi and Europe. Now he has co-written a couple of songs with DYNAMITE and they sound fantastic.

In a few weeks we will return to the studio and finish the album, more info coming soon.”

Wikipedia indicates that Carlsson has songwriting credits for songs with Def Leppard (“Unbelievable” from the X album), Bon Jovi (four songs from the Bounce album), Europe (two songs from Last Look At Eden) and Paul Stanley (five songs from Live To Win including the title track and “Bulletproof”).

Sleaze Roxx stated the following in its review of Dynamite‘s last studio album Blackout Station: “This album is pure classic rock ‘n’ roll marinated with whiskey and served with a heavy dose of blues. Pretty much all the songs follow this formula but the ones that stick out as particularly strong are the sing-along anthem “Hail Rock N’ Roll”, where I could easily hear an arena of 20,000 fans roar the chorus “Now I know, Hey rock n’ roll”, and the fast paced “Hard To Please” and “Burn It Down”, which are pure infectious fun.”

Dynamite‘s “Burn It Down” video:

DYNAMITE – Burn It Down (Official Video)