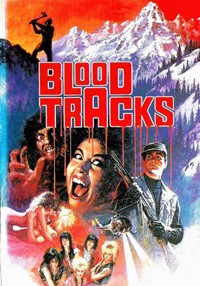 ‘Blood Tracks’, directed by Swedish cult director Mats-Helge Olsson, has gained a big following since it’s release in 1983, and this is the first time that the film has been made available on DVD.

‘Blood Tracks’ is a blood bath of terrifying violence created when a group of rock musicians and their film crew venture deep into the snowy mountains to shoot scenes for their latest video. The group are left stranded after being cut off by a series of avalanches, and are forced to take refuge in a remote mountain cabin. The crew decide on a nearby disused power station, as the next shooting location, but soon discover that they are not alone as they and the group fall into the clutches of the wild, mutant like creatures that inhabit the power station. Fearing that their territory and existence is being threatened they unleash a bloody reign of terror upon their unsuspecting victims.

The ‘Blood Tracks’ DVD reissue will include the following special features:

The first 1000 copies comes with the re-make of “We Go Rocking” that the re-united Easy Action recorded in 2008. The track was the official song for the Speedway Grand Prix, and the CD-single also features the band’s brand new song “Jack Is Back”.