Great news for Eclipse fans and anyone who appreciates high quality melodic rock as Swedish rockers have announced that they will be releasing a new album at the beginning of 2017 and also will be continuing their partnership with Frontiers Music Srl. 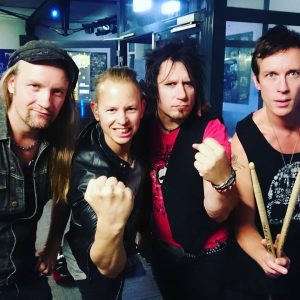 In a video (see below) from Rockfest in Barcelona, Spain, Eclipse frontman Erik Martensson declared: “We have happy news to announce that we just signed a new record deal with Frontiers Records and we’re gonna continue our successful journey together. And in the beginning of next year, we are going to release a brand new Eclipse album so are you ready to rock?”

Sleaze Roxx stated the following in its review of Eclipse‘s last studio album Armageddonize: “The terms hard and melodic don’t always see eye to eye, but Eclipse has been able to successfully blend the two for years now. On their fifth studio release Armageddonize, the Swedes pick right up where the heavier direction of 2012’s Bleed & Scream left off as both albums take melodic rock to exceptional extremes. I think what really sets Eclipse apart from so many others is the rapid-fire drumming that has permeated their sound since the addition of Robban Back (check out his work on “All Die Young”), and in the process gives them that extra shot of adrenaline that is all too often lacking. Combine that with their sense of melody, walls of infectious choruses and fret-work delivered by the guitar Gods themselves, makes for one entertaining group and album.

Eclipse‘s “Stand On Your Feet” video: