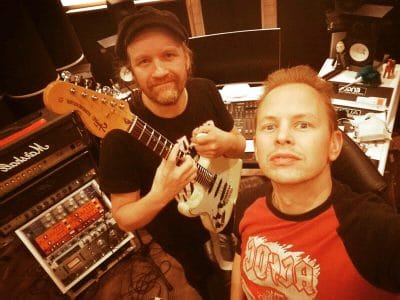 The following messages were posted on Eclipse‘s Facebook page:

November 12, 2018 (with slight edit): “Haven’t seen skies like that in Sweden for a while. Probably a good thing as we’re pretty much locked inside the studio all day these days.”

Eclipse‘s last album Monumentum finished at #2 on the Sleaze Roxx Readers’ Top 20 Albums of 2017 and #7 on the Sleaze Roxx’s Tope Ten Albums of 2017 to which Sleaze Roxx stated: “The funny part about Eclipse‘s latest studio album Monumentum is that I find that it’s actually not as good as their 2015 record Armageddonize. Yet, it is Monumentum that figures on Sleaze Roxx’s Top Ten Albums of 2017 while Armageddonize didn’t make the cut in 2015. But as previously stated in this article, the fault is mine in that regard. I just never got around to listening to Armageddonize until 2016 given that I was not that into its predecessor Bleed & Scream and by then, the Sleaze Roxx’s Top Ten Albums of 2015 was already posted… In any case, Monumentum is still a very good album with Eclipse retaining a lot of the catchiness and melodic greatness that was so prevalent on Armageddonize. This time around, Eclipsedo spread their wings a little bit more such as on the heavier closing number “Black Rain” which shouldn’t be a surprise considering frontman Erik Mårtensson‘s love for thrash metal bands. With Eclipse‘s last four studio albums dating back to 2008 figuring on (or in the case of Armageddonize It being erroneously omitted from) Sleaze Roxx‘s Top Ten Albums year-end lists, Eclipse have to be considered one of the most consistently great bands of the last ten years.”

Subscribe To Be Alerted When We Add New Videos – http://radi.al/SubscribeFrontiers | Buy or stream the single here: http://radi.al/EclipseKillingMeThis is a …