Heavy metal mogul Eddie Trunk recently had a first hand experience on the shitty side of the music business when he was asked to host four Farm Rock music festivals organized by Freddy Stahmer.

The following is an excerpt from the article entitled “9/23: FARM ROCK CONCERT SERIES AND THE SHITTY SIDE OF THE MUSIC BIZ” on Trunk‘s website eddietrunk.com: 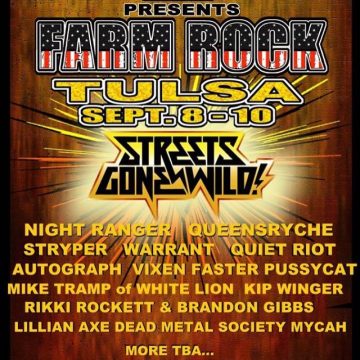 “Some of you may be familiar with an 80’s concert festival series the last few years known as “Farm Rock”. The last few years these events have taken place in Chicago, and more recently there have been Farm Rock’s in Nashville, Atlanta and several other locations. Farm Rock was run and owned by a promoter named Freddy Stahmer and his company Frederick Entertainment. I’ve hosted a few of his events over the last few years. None were very well attended that I was at, but they all went off okay in the end, and although shaky at times, people were paid. Par for the course with the smaller festivals it featured many of the usual suspects of 80’s acts. Freddy was on the surface a good guy. I got to know him a bit and he reached out recently asking me to host 4 Farm Rocks for him. The first of which was two weeks ago in Tulsa, subtitled “Streets Gone Wild”. The next was supposed to be this weekend in IL. Then Atlanta and Iowa. I trusted Freddy because we worked together in the past and he never screwed me over. I even backed him when asked by others that he was a good guy as far as my experience had gone. I hosted the press event for him for Streets Gone Wild as well.

I knew trouble was in store when Freddy called a few months before the event looking for people to invest money with him in Farm Rock. It’s never a good sign when a promoter has bands and shows booked but is still looking for money to cover his costs. But again, he never screwed me so it was what it was. 4 times leading up to Tulsa he told me he would pay me a deposit for my appearance fee. The deposits never came. Now usually I would use an agent or manager on this stuff, and not do anything until money comes in (like bands do). But when I have positive history with people I have a tendency to trust people and take them at their word. My word is better than any contract, and I like to think that goes both ways. Silly me thinking like that after 30 + years in music! The day before I left for Tulsa I reminded him no deposits came and he assured me I would be paid in full on arrival Thursday. But it was one delay after another when I got there. I hosted his pre party, did press in the market day of, and did my hosting duties all weekend in Tulsa, all the time being assured I would be paid. When Saturday rolled around Freddy had disappeared. Yes that’s right, gone on the biggest day of the festival! Most bands will not take the stage before being paid in full for most events. So Saturday of Streets Gone Wild almost didn’t happen. But the show was bailed out by some of his partners who he enlisted to work for him. They gathered enough money up to make sure the bands played and people had a show. Freddy claimed he was in the hospital with a heart issue. To this day I have no idea if that’s true.

Saturday in Tulsa was tension filled. Who did or didn’t get paid, who was or wasn’t going to play. Freddy MIA, leaving people working for him to sweat and scramble. After all was said and done I was paid by check, a check I knew would be like hitting the lottery if it cleared. Freddy was in touch with me 3 times over the last 2 weeks with different ways he would get me paid. He told me the check would be good this past Wednesday. The check is not good. Many vendors and people that worked this event were also ripped off and not paid. Sponsors, vendors, artists. For me and many others these events are a major part of how we make a living. Sadly the business has always been filled with people like Freddy. Very little experience and reality on how shows work, what bands are worth, and how to properly book, market and promote events. While not inherently bad people, they are more just fans who are blinded by the attention they get around artists they were a fan of. And that’s never a good recipe for success. Freddy fucked over a whole bunch of people, me included, and now is on the run, hiding from everyone looking for him. He has gone off the grid..

It’s very important to note that Streets Gone Wild may very well continue. If it does it will be with good people that helped save the day the best they could 2 weeks ago. Tom Green, Doug Burgess and others were awesome and bailed many out, me included, and I thank them. My hope is they take this over and keep it going. But BEWARE of anything branded Farm Rock or Frederick Entertainment or Freddy Stahmer. His damage continues because the show that was supposed to be this weekend in Schaumberg IL is not happening….”

You can read the rest of the article at eddietrunk.com.

Metal Sludge recently reported that a civil action has been commenced against Stahmer and Frederick Entertainment on August 29, 2016 as indicated by dailyterritorial.com.