Eddie Trunk shoots pilot for new show ‘Inside Out’

Good news for Eddie Trunk fans worldwide. The world famous metal interviewer, radio and podcast host has announced that he has just finished shooting the pilot for his new interview show called Inside Out in New York City. Trunk‘s first guest is none other than the incomparable ex-KISS guitarist Ace Frehley. 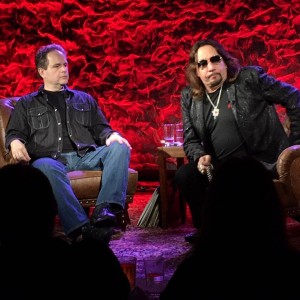 “Just wrapped shooting my pilot for my new interview show Inside Out in NYC. Over 2 hours of great talk with Ace Frehley! And he even jammed some classic riffs, some for the first time in 30 + years! Massive thanks to Ace, the audience, and the great staff at Iridium Jazz Club Nyc ! I’ll let you know what comes of this 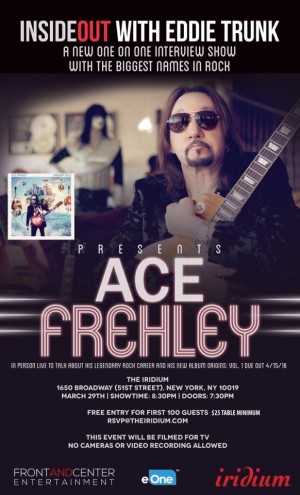 show when I know. Needs to be edited then shopped. But prospects are good! Thx to Eric McConnell for the photo. Plenty more photos coming.

Back on March 10, 2016, Ruben Mosqueda of Oregon Music News (and who is also a long-time Sleaze Roxx contributor) had interviewed Eddie Trunk who had advised that he was hoping for some good news in terms of a new network to host That Metal Show. Trunk stated in his interview with Oregon Music News: “Thank you and thanks you to the fans that are upset about the show. We didn’t want it to happen either; we had a tremendous run with them. We’re grateful for what it was but we do hope to go to bigger and better things from here forward. As far as the name is concerned it’s under the control of our producer who I might add no longer works for VH-1. For all intents and purposes we control the name with him. He owns it of course we’re tied to it because it’s ‘That Metal Show.’ We’ll see how this all plays out. He’s trying as hard as we are to try to keep the show alive and find a new home for it. It could wind up bigger, better and on a new network—which is what we all hope for. It could wind up as a slightly different variation on the show under a different name. We’re hoping for some good news in the next month or so.”