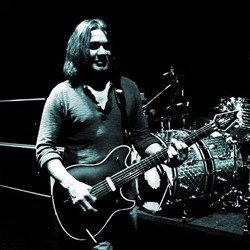 According to CTV News, the Van Halen guitarist went under the knife for a “severe bout of Diverticulitis” — small pouches formed in the wall of the intestine that can cause a great deal of pain when inflamed or infected — but the 57-year-old rocker is expected to make a full recovery “within four to six months”.

A statement on the band’s website read: “Eddie Van Halen underwent an emergency surgery for a severe bout of Diverticulitis. No further surgeries are needed and a full recovery is expected within 4 – 6 months.”

As a result of his operation, the group — who are also made up of singer David Lee Roth, Eddie’s brother Alex Van Halen, who plays drums, and Eddie’s son Wolfgang Van Halen on bass guitar — have postponed the Japan leg of their tour and are hoping to be back on the road next year.

The statement added: “Van Halen’s scheduled November 2012 tour of Japan is currently being rescheduled and the band looks forward to seeing and playing for their fans in 2013.”

Van Halen were due to perform three dates in Japan, with gigs scheduled in Osaka on November 20th and 22nd and one in Tokyo on November 27th.