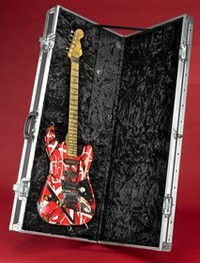 Eddie Van Halen’s Guitar Given To US Museum

One of Eddie Van Halen’s guitars will have a home at the Smithsonian’s National Museum of American History.

The museum announced Monday that it has acquired the “Frank 2” guitar that Van Halen used during his 2007-2008 North American tour with original lead singer David Lee Roth.

Museum director Brent Glass says the guitar reflects Van Halen’s innovation, talent and influence. It will be part of the museum’s instrument collection as a more contemporary piece.

A museum spokeswoman says there are no current plans to put the guitar on public view.