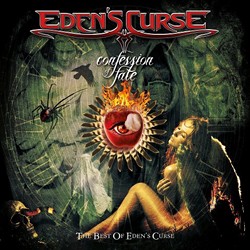 Rising Phoenix Music and Still Cursed Productions have announced the release of ‘Confession Of Fate: The Very Best Of Eden’s Curse’.

‘Confession Of Fate’ includes five previously unreleased tracks along with many fan favorites. The package art was designed by Stephen Van Baalen (Mike Portnoy’s Adrenaline Mob) and the disc is now ready to ship worldwide via www.edenscursebestof.com.

Several collector packages of ‘Confession Of Fate’ are also being made available, including ‘The Judas Jaw Dropper’ which features over 350 audio tracks of unreleased demos, alternate mixes, live shows, interviews and more.

Says singer Michael Eden, “The songs for ‘Confession Of Fate’ were chosen by the fans! For several months I took notice of what you guys said and together we came up with the ‘Confession Of Fate’ track listing. You got damn near everything I could throw at ya. Opening the vault and giving access was easy. No corner was cut on production. The final remastering and artwork are to my usual high standard. Eden’s Curse equals me behind the mic, and you in the audience. The audience is now in your living room, car, garage, boat, bathroom, or back yard shit kicker!”