Melodic rockers Eden’s Curse have released a greatest hits compilation titled Testament – The Best of Eden’s Curse via AFM Records and a lyric video for the track “Forever.”

Track List for Testament – The Best of Eden’s Curse: 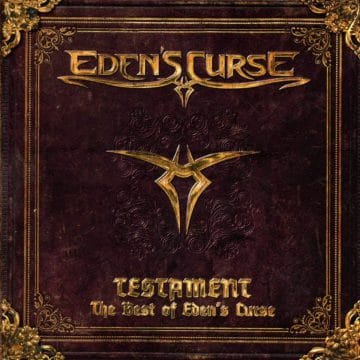 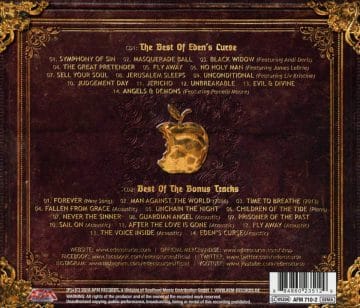 Eden’s Curse‘s “Story” on their Facebook page states in part (with slight edits):

“In 2006, Scottish bassist and songwriter Paul Logue (Cry Havoc, David Readman) hooked up with American vocalist Michael Eden (Seven Ten) to see if they could work on some songs together. Several ideas later, the pair quickly realised that they were onto something special and that they needed a band. Drummer Pete Newdeck (The Shock, Lionsheart, Grim Reaper) was first to join, with German guitarist Thorsten Koehne (Demon Drive, Attack) and Ferdy Doernberg (Axel Rudi Pell, Rough Silk) completing the lineup. Eden’s Curse was born!

In 2007, AFM Records released their self-titled debut album, which came on like a cross between classic American bands Queensrÿche and Dokken, married with the European stylings of Pink Cream 69 or a latter day Edguy. The album was warmly received by the global music press and public alike and the band began developing a following. 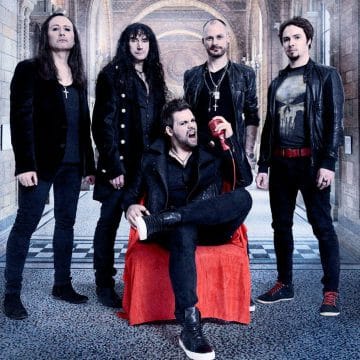 The multinational quintet gained even further traction in 2008 with their sophomore album ‘The Second Coming‘ and especially the popular single ‘Angels & Demons‘, a duet with Pamela Moore aka Sister Mary from Queensryche’s legendary ‘Operation: Mindcrime‘ album.

The band moved from studio to stage on tours with Stratovarius, Firewind, Alestorm and several major festival apperances in Europe and USA, before taking things up a notch further on their third album ‘Trinity‘ featuring with duets with James LaBrie (Dream Theater) on ‘No Holy Man‘ and Andi Deris (Helloween) on ‘Black Widow‘. Both remain two of the group‘s biggest songs to date. The collaboration with LaBrie in particular paid off handsomely and led to a short UK run with Dream Theater later that year. Michael Eden called it a day and the band recruited Serbian vocalist Nikola Mijic (Alogia) for their fourth album ‘Symphony Of Sin‘ in 2013. Lead single ‘Evil & Divine‘ remains the band’s biggest YouTube success to date.

A 2014 debut headline UK tour followed, with new drummer John Clelland (Code Of Silence) on the stool, before recording an old school double live album in their adopted home of Glasgow, Scotland later that year. ‘Live With The Curse‘ was released in 2015 as the band embarked on a short German tour with Freedom Call.

The band released their fifth studio album ‘Cardinal‘ and first with new Finnish keyboarder Chrism in 2016, which featured a duet with Liv Kristine (Leaves‘ Eyes) on ‘Unconditional‘. Later that year they joined Freedom Call again on a more extensive tour of Germany, which saw Liv Kristine join them onstage in Stuttgart.

Celebrating the tenth anniversary of their debut album, Eden’s Curse released a re-recording of their classic debut album, packaged together with their first Live Concert DVD as ‘Revisited‘ in 2017.

With the band set to embark on their biggest UK tour to date, supporting Michael Schenker Fest in November 2018 and several major UK festival appearances lined up, both AFM and Eden’s Curse feel now is the perfect time to release their ‘Best Of‘ album.”

Taken from the album „Testament – The Best Of Eden’s Curse”, out November 2nd, 2018.Subscribe to AFM Records here: http://bit.ly/1Ag5sAWGet access to officia…