To celebrate the tenth year anniversary of the release of their debut album, Eden’s Curse will be releasing Revisited, which consists of the debut album re-recorded and a bonus live DVD. Revisited will be released via AFM Records on August 24, 2017.

The following message was posted on Eden’s Curse‘s Facebook page back on June 27, 2017 (with slight edits): 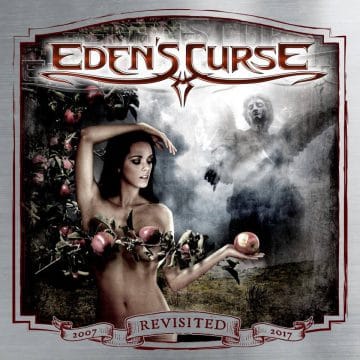 “To celebrate the tenth anniversary of their debut album, Eden’s Curse will release ‘Revisited‘ – a two disc set including the debut album re-recorded in it’s entirety and a bonus DVD ‘Live In Glasgow – The Official Bootleg‘, on 25th August 2017 worldwide via AFM Records.

Bassist Paul Logue explains: “The first album really was the foundation for all that was to follow and ever since Nikola joined the band we have been inundated with fan requests to re-record the older material and whilst it would be great fun, it would also be the same amount of work as recording a brand new album. In actual fact, that is one of the main reasons we recorded the live album, ‘Live With The Curse‘, so the fans could hear Nikola‘s voice on the older songs. However, it did not stop the flow of requests – in fact it made it worse! So, with this pivotal tenth anniversary coming up, we thought it would be a good idea to do it and AFM agreed. It’s turned out really great and given the older songs that little bit of freshness. It’s not to out-do what went before but to pay homage to a very important record in our career”.

Coupled with the re-recorded debut album is the ‘Live In Glasgow – Official Bootleg DVD’ which is the ‘Live With The Curse‘ live album recording show in it’s entirety. Filmed at The Classic Grand in Glasgow on 28th November 2014, the release mark’s the band first official live DVD release, albeit in a bootleg form. “The footage is absolutely excellent” states bassist Logue. “We did not intend to film a DVD, but the audio recording company brought two cameras along to capture the show and when we saw the results we were really surprised! We put out four videos on You Tube to promote the live album and the fans kept asking to see the full show on DVD. So, here it is! We’ve called it a ‘bootleg’ because it wasn’t recorded on 6 cameras, e.g one above the drummer and one on the keyboard player – like we would do for a proper DVD release. However, beyond that is looks and sounds great! We WILL do a DVD in the future but in the meantime this give our fans across the world something to enjoy time and time again and it makes ‘Revisited‘ a very special package indeed” he adds.

‘Revisited‘ is the ultimate package for Eden’s Curse fans old and new and a fantastic introduction to the band’s music. It’s a true celebration of the record that started it all, from the guys who carry the legacy forward. Over 60 mins of music and 100 mins of film make ‘Revisited‘ a must have for all Eden’s Curse and melodic metal fans.