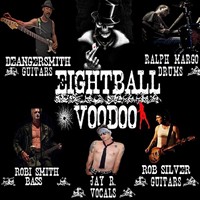 Heavy sleaze rockers Eightball Voodoo, featuring former JackViper frontman Jay R, will be releasing a version of the famous Geordie folk song “Blaydon Races” as a single in the U.K on August 15th, 2011.

The song is sung by supporters of the Newcastle United football club as a football chant and was wrote by Geordie Ridley in 1862. It may seem a strange choice for a heavy sleaze rock band but Jay R, Eightball Voodoo’s lead singer, states, “I’ve wanted to do a version of the song for a long time as I have a lot of Geordie family and friends, but for some reason or another it never happened. Then Deangersmith came up with a fucking killer riff for it and we decided to do it with Eightball Voodoo. The decision to release it before the ‘666 Reasons’ EP is purely to do with schedules and ‘666 Reasons’ will be released worldwide a couple of weeks after Blaydon.”

Alan Kerr of Deadboy designs will be providing the artwork for the single which will be released digitally through iTunes, Amazon, Spotify and all good online stores. “Blaydon Races” will also be available on the special Japanese edition of 666 Reasons. In other news, Geoffrey Ulrich of Graven Images films (based in Los Angeles) will be directing and producing a video for ‘666 Reasons’.

Eightball Voodoo are still offering a free download of the demo version of “The Devil’s Country” at www.reverbnation.com/play_now/song_6491896.