Icelandic artist Einar Vilberg has just released his first single “Apathy” from his upcoming solo album. Vilberg handled the guitar, drums and vocals on the song and produced, recorded, mixed and mastered the track as well. The bass duties were handled by his twin brother Stefan Vilberg. 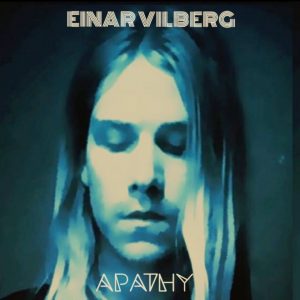 Vilberg‘s bio on his Facebook page states (with slight edits):

“Einar Vilberg is a composer, vocalist, multi instrumentalist and producer from Reykjavik, Iceland, best known as the frontman of Noise – an alternative rock band with whom he has written, produced and released 4 LP´s.

Einar formed Noise in 2001 with his twin brother Stefan Vilberg and together they have received fantastic reviews from magazines like the Rolling Stone and many others. Their 3rd record Divided got a great response by their fans and critics alike.

The 1st single off the album “A Stab In The Dark” was awarded “Song of the year 2012” in the American Sunset Islend Music Awards. The song was also hugely successful in Iceland and it was picked as one of the top 10 songs of the year by local music reviewers Rjominn.is. The Divided record was also placed among the top 10 albums of the year.

In April 2016, Noise released their 4th record Echoes. The album is an acoustic, symphonic journey that has been praised by local and international music critics as the bands best work to date .

Einar Vilberg has toured internationally with Noise, doing shows in various cities in Europe and doing numerous tours in the U.K. He has also produced and recorded music locally and internationally, working with established record producers in L.A and in the U.K.

Einar is currently writing and producing his debut solo record.”