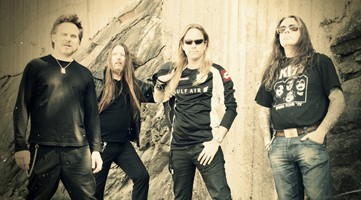 Electric Earth Team Up With Beau Hill On New Single

Sweden’s Electric Earth will release an exclusive digital single version of “Free Fall”, a track from their new album ‘Touching The Void’, on Monday 16 October. It will be available from all the major digital stores.

What makes this version special is that it’s mixed/produced by well known American producer Beau Hill, famous for his work with Ratt, Alice Cooper, Twisted Sister, Gary Moore and Europe. The band is really pleased with the result and hope to be able to work with him again in the future.

Electric Earth will be one of the bands that will participate on the upcoming Whitesnake tribute ‘Still Of The Night: A Millennium Tribute to Whitesnake’, which will be released by Versailles Records later this year. They have recorded a cover of “Young Blood”, the opening track on the ‘Saints and Sinners’ album.

Electric Earth has also given away “Amplification”, the opening track on ‘Touching The Void’, to an upcoming Swedish compilation from which all profit will go to the homeless.

At the band’s official website, www.officialelectricearth.com, you can sign up for their newsletter/mailing list. If you do so you can, immediately, download a handful of tracks (two of them are from ‘Touching The Void’) for free! In addition you will, during the following months, be able to download one song per month from the band. It can be demo tracks, alternative mixes, cover songs or songs from the member’s old bands.