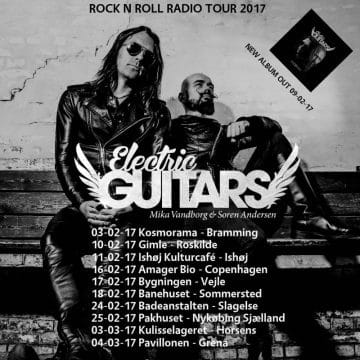 Electric Guitars have always played rock with bold gestures, big tunes and great ambition. Neither of these features – ambitions none the least – have become any the less on the bands third album ‘Rock N Roll Radio‘. The title is not quite plucked out of thin air:

“AC/DC can sell 60,000 tickets in 12 minutes, Volbeat can sell out tickets in the Park Arena, Metallica‘s new album just went straight to number one on the album charts; rock music is doing really well in Denmark. Still, you have to search your radio over and over to find rock on commercial radio. We have timelessly speculated why this is, and therefore the title track is a tribute to those of us who long for rock tunes on the radio. This single is – incidentally – perfectly suited for radio” Søren Andersen adds.

On ‘Rock N Roll Radio‘ Mika Vandborg and Søren Andersen have the legendary company of Jacob and Jesper Binzer. Søren Andersen played bass for D.A.D. back in 2015, when Stig Pedersen was on leave with a broken arm. Friendships were forged and Søren learnt a lot about songwriting by being part of Denmark’s most iconic rock band. This musical companionship has resulted in Jacob Binzer producing ‘Rock N Roll Radio‘ and both Jacob and Jesper Binzer appear on the album’s second single ‘Headless Chicken’.

The first single ‘Swagman’ is already released and is a great example of what to expect from Electric Guitars under the production of Jacob Binzer. Electric Guitars‘ music has never been known for being polished, nevertheless this time it has been cut to the bone. Ten hard-hitting songs, ten musical uppercuts, ten songs of sex, rock, ladies and what to do with the life that you have been given. Lots of guitar-madness, lots of attitude and no bullshit.

The con-amore project Electric Guitars was unveiled five years ago, when guitarist Søren Andersen and Mika Vandborg joined forces and set off on an adventure with the guitar pedals down, full throttle. Electric Guitars has toured intensely the last five years playing in Denmark, USA, Sweden, France and Germany. 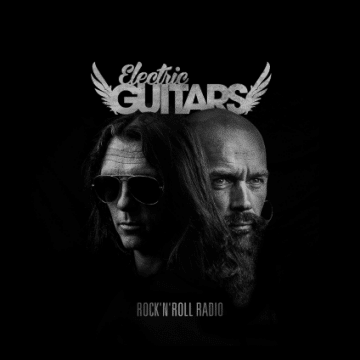 “Swagman” is the new single from Electric Guitars, produced by Jacob “Cobber Binzer”. Released on Mighty Music/Target Group 27th of May 2016.Stream, download…