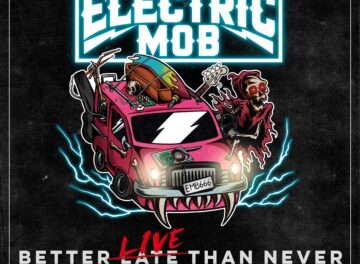 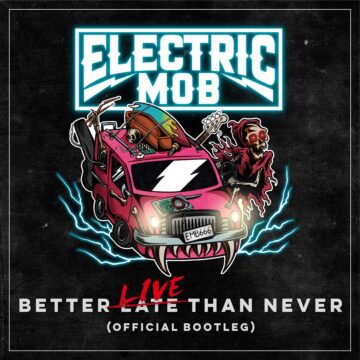 The following message was posted on Frontiers Music Srl‘s Facebook page back on September 16, 2022:

“The brilliant Electric Mob are currently putting the finishing touches on their upcoming second studio album, details of which will be unveiled before year’s end. In the meantime, Frontiers Music Srl is pleased to announce the release of a very special live performance from the band, captured at Nicos Studio in the band’s hometown of Curitiba, Brazil, “Better Live Than Never“. You can watch the full performance in all it’s blazing glory on YouTube HERE:

The audio of the full performance can also be streamed on your preferred digital music service HERE: https://orcd.co/betterlive

A mixture of powerful vocals, mean guitar riffs, and heavy groove with influences from the ‘70s, ‘80s, and ‘90s, Electric Mob are faithful students, lovers, and progenitors of rock ‘n roll. This, for lack of a better term, “electric” performance from the band features tracks culled from the band’s debut album “Discharge” as well as tracks from their independent EP, “Leave A Scar” and showcases how they are clearly a coming force to be reckoned with.

Formed in Curitiba, Brazil by Renan Zonta (vocals), Ben Hur Auwarter (guitar), Yuri Elero (bass), and André Leister (drums), Electric Mob caught the attention of Frontiers with their tremendous hard rock songs that show the influence of contemporary hard rock giants while also showing a knowledge of the hard rock pillars of the ’70s and ’80s. Electric Mob is made up of four young, hungry, and extremely talented musicians, with the rock ‘n roll attitude to deliver their explosive performances. Like a sonic punch to the face, their songs bring a heavy sound with a distinct groove.

Electric Mob is one of rock’s most exciting and promising newcomers in years. Get on board the rock n’ roll train!”