Electric Mob unveil video for single “Higher Than Your Heels”

Brazilian rockers Electric Mob consisting of lead vocalist Renan Zonta, guitarist Ben Hur, bassist Yuri Elero and drummer André Leister have unveiled a video for their new single “Higher Than Your Heels” from their debut full-length album Discharge, which was released via Frontiers Music Srl back on June 12, 2020. 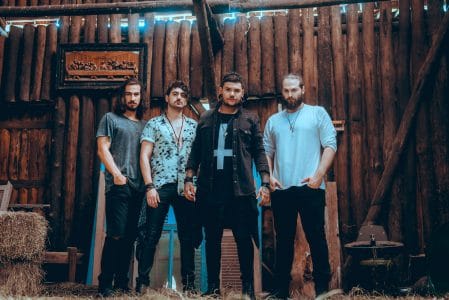 Our Brazilian pals Electric Mob released their awesome debut album, “Discharge” in June 2020 amidst some strange times in the world. Their energetic hard rock was something all of us rock fans needed at the time and still do right now! If you haven’t familiarized yourselves with the these dudes yet, then check out their brand new music video for “Higher Than Your Heels”, a smokin’ track from said album.

These guys are influenced by legends like Guns ‘N Roses, Aerosmith, Whitesnake, and the like, but also bands like Foo Fighters, Audioslave, etc. and aren’t afraid to throw some bluesy overtones in the mix. Legendary vocalists like Robin McAuley and Jeff Scott Soto have also given singer Renan Zonta a big thumbs up, which is indeed high praise.

And Brazilian fans may recognize the main character in the video, Boça.

Sleaze Roxx stated the following in its review of Discharge including the new single: ““Higher Than Your Heels” displays a wide range of influences including some blues and funk while incorporating some horns during certain sections. It’s actually one of my favourites on Discharge despite not rocking that hard.”

Sleaze Roxx concluded its review by stating: “Overall, Zonta delivers a great vocal performance on Discharge but he doesn’t always have the songs to really showcase just how good he can sing. Discharge is a bit of a hit and miss affair. The first side or first six songs are much stronger than the rest of what is offered on the album. It’s a shame that Electric Mob elected to have 12 songs on Discharge. I think that had Electric Mob simply released the first five songs (while skipping the unnecessary intro track “Awaken”) along with “Higher Than Your Heels”, they would have had a really good record but instead Discharge is watered down with some subpar tracks towards the end. The bottom line is that Electric Mob need to work on their songwriting as they have the potential and talent to come up with an exceptional album but they need better overall songs to do so.”