Ellefson lead vocalist Thom Hazaert and former Megadeth bassist David Ellefson‘s seemingly right hand man in many ventures has announced his retirement. Sleaze Roxx does not know whether the recent negative publicity surrounding David Ellefson has had an impact on Hazaert‘s decision. Hazaert has also announced via his Facebook page that he intends on opening a retail store presumably called Totally Awesome Vintage in the fall.

The following message was posted on Hazaert‘s Facebook page yesterday: 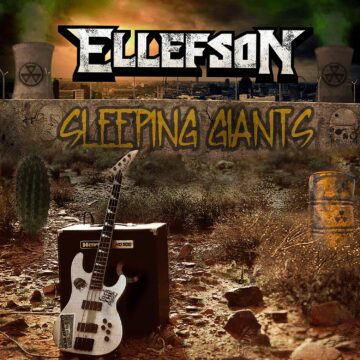 “For the last 30 years, I have toiled away in the music business (and life) being a person who did everything for everyone else, at the expense of myself – my finances, my happiness, my self-respect. I scraped, I barely made money, I suffered. I put everything I had into something to get nothing. Started over from scratch COUNTLESS times, only to be fucked again by someone or something else, right as the hard work started paying off (while they ran off to tell everyone how I fucked them.)

I pushed myself to the point where I LITERALLY died. And maybe it’s just the nature of the thankless job, but most of the stories of that experience end with being betrayed by the very people I put everything into helping, while they ran off with everything I created, or destroyed it. And somehow, I always end up the bad guy.

That goes for personal, and business relationships (which in this business are essentially one and the same). I know hundreds, if not thousands of people who could or maybe would say that I have done something huge for them, something that put them closer to their dreams. For every 100 of those, there’s a few who would rather skew the perspective of everything I did for them, and twist distortions, or flat out lies or delusions, to say the opposite, and make me out to be some kind of monster.

Nope, I’m not perfect. But in the immortal words of Tony Montana, “I ain’t never fucked nobody that didn’t have it coming.” I am honest to a fucking FAULT, and know my weaknesses, and have always avoided them. I am kind, sane, reasonable, professional, and level-headed. I would give anyone the shirt off my back, and go out of my way to try and help EVERYONE, and put as much good into the World as I can. But as the saying goes, no good deed goes unpunished.

Now I’m at a point I can barely move or function half the time, have crippling anxiety, and no motivation to do anything, frankly not only because of my health, and the mountain of medications I am on to stay alive, but because any ounce of motivation or excitement, hope or joy has been sucked out of my life, and this business, which, at its worst, is a constant exercise in deflecting and/or maintaining relationships with (and placating) crazy, entitled, toxic, and/or delusional people.

We live in a nearly apocalyptic world where anyone can say anything and post it on the internet, and it’s true. A World that thrives on drama, and manipulation, where everyone wants to be a victim, and anyone will hear anything, with no context or actual knowledge of the situation, and it’s true. (If they want it to be.) That’s this world, and even moreso, this business. And this has been proven to be true of even some of my closest “friends”.

Trust me, If I wanted to spill dirt, or be a victim, or air people’s dirty laundry, I have so much I could start a fucking dry cleaners. I believe in trust, and honor, even when those people go out of their way to try and fuck and destroy YOU.

So, consider this my official retirement. Fuck music. I hate it now anyway. Fuck the music business. There really isn’t one, and I hate it even more. (Of course there are a lot of amazing people in this business that I LOVE, and always will.)

Fuck social media (and public life). I’m done with that too. To my friends, and those who have supported me, thank you. Liars, shit-talkers, behind the back whisperers, betrayers, and people who pretended to be my friends, or used me. Have at it.

I’m gonna find something to do that I like. I’m going to collect and sell toys, and hang out with my kids and my dog, and try and be happy I’m alive. I might be broke, but I was always fucking broke. Welcome to the fucking music business.

Say goodnight to the bad guy.”

Hazaert is also the lead vocalist for Megadeth bassist David Ellefson‘s solo band, first appearing on the album Sleeping Giants, a collection of new songs, and archived Ellefson solo material, released in 2019 on Combat Records as a companion to Ellefson‘s second memoir More Life With Deth, co-written by Hazaert; Hazaert also performed with Ellefson on several US and European tours, and on Megadeth‘s MEGACRUISE. In March 2020, Hazaert and Ellefson released the single “Simple Truth”, again under the ELLEFSON name, which was announced as their first single from an upcoming debut studio album, tentatively set to be released in October 2020. “Simple Truth” was released in April 2020 as a single, and as part of a limited edition EP, with proceeds benefiting the Italian Red Cross Covid-19 relief efforts.”

Ellefson‘s “Wasted” single with Thom Hazaert on lead vocals (from No Cover album):