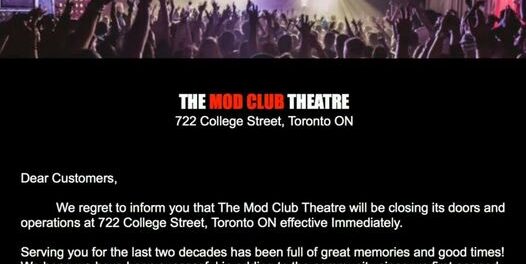 It’s a very sad day for concert goers in the greater Toronto area in the province of Ontario (Canada) as one of its legendary venues has closed its doors and operations. The Mod Club Theatre, which had been operating for 20 years, made its shock announcement yesterday. 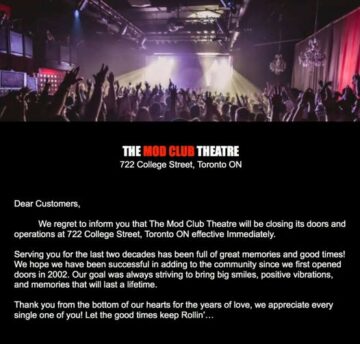 We regret to inform you that The Mod Club Theatre will be closing its doors and operations at 722 College Street, Toronto ON effective immediately.

Serving you for the last two decades has been full of great memories and good times! We hope we have been successful in adding to the community since we first opened doors in 2002. Our goal was always striving to bring big smiles, positive vibrations, and memories that will last a lifetime.

Thank you for the bottom of our hearts for the years of love, we appreciate every single one of you! Let the good times keep Rollin’…”

Sleaze Roxx representatives attended concerts at The Mod Club Theatre on many occasions including:

Chickenfoot on May 24, 2009 during the group’s inaugural six-city tour run;

Doro with openers Sister Sin and Diemonds on February 7, 2013;

Dirkschneider on January 10, 2017 (which turned out to be Sleaze Roxx editor-in-chief’s favorite concert for that year);

Sister Sin performing “One Out of Ten” live at The Mod Club Theatre in Toronto, Ontario, Canada on February 7, 2013:

Dirkschneider performing “Balls To The Wall” live at The Mod Club Theatre in Toronto, Ontario, Canada on January 10, 2017: