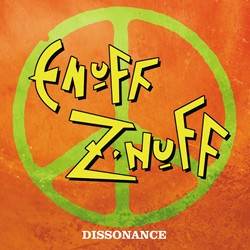 ROCK CANDY RECORDS is re-launching their sister label Grind That Axe specifically to handle new releases from established artists. The launch commences with the release of Enuff Z’Nuff’s latest release ‘Dissonance’. ‘Dissonance’ will be released on Rock Candy Records on July 19th with two bonus tracks — the CD will be available for pre-order starting on July 1st (and shipping on July 12th) at www.rockcandyrecords.co.uk.

When asked what it was like to record with Donnie Vie again on ‘Dissonance’, bassist Chip Z’Nuff told Sleaze Roxx, ” It was simple, he came down with ideas and both of us sat down. In fact we rented a mansion and both of us came up with ideas together. Donnie is just very creative, has beautiful pipes and is one of the best writers I’ve ever worked with that’s for sure. Once we got in the studio it started off a little slow with all of us, but once we got the vision of what we wanted to do, instead of just making a record for making a record’s sake, then it became something special. I think we nailed it. We came up with twenty five or thirty ideas and then just put the best eleven on the record, but there’s a lot of other stuff in the kitty too.” The entire Chip Z’Nuff interview can be viewed at https://sleazeroxx.com/interviews/chip-znuff-interview/.

They say that when the going gets tough the tough get going. It’s an old adage that could be applied to numerous rock bands who refuse to die, but for Enuff Z’Nuff it’s become, more or less, a battle code. In fact it’s a maxim that that they’ve lived by since day one of their inception. ‘Dissonance’ is a record full of all things sugar and spice with a sound and swagger that continues in the finest EZN tradition of razor sharp riffs and melodies to die for. The great thing about core duo Donnie Vie and Chip Z’Nuff is that they instinctively know how to inject both the maximum amount of muscle into every riff and squeeze the best out of every chorus. If you don’t believe it then plug-in and play tracks such as the title song ‘Dissonance’, ‘Lazy Dazy’, ‘Code Red’, ‘High’ and the beautiful ballad ‘Roll Away’. All Prime EZN with all the grand musical accoutrements you would reasonably expect. And, as a special treat, the album contains two additional bonus tracks not available on the Japanese release.

Their creative resurgence is further enhanced by the recent appointment of European booking Agent X-Ray Touring and festival appearances throughout the summer – including Download – plus a planned full European headlining club tour later this year and an appearance at Hard Rock Hell in December.