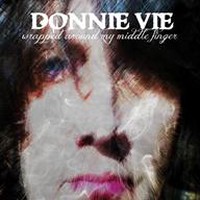 Enuff Z’Nuff frontman Donnie Vie will release his new solo album ‘Wrapped Around My Middle Finger’ on February 27th, pre-orders are being taken now at www.cargorecords.co.uk and hmv.com.

Donnie Vie consistantly amazes with the quality of his output. Outgrowing the ‘Beatle-esque’ tag and the ‘glam’ label many years ago, Vie continues to deliver with a new found enthusiasm. Vocals, guitar, keyboards and much much more… Vie is a one-man powerhouse of a talent. While Enuff Z’Nuff were taking some downtime, with Chip Z’Nuff touring the world with Adler’s Appetite, Donnie kept himself busy by recording the best album of his career and touring with The Donnie Vie Band that includes guitarist Jimmy Maguire, bassist Patrick Pulver and fellow Enuff Z’Nuff member Randi Scott on drums.

‘Wrapped Around My Middle Finger’ is the brand new album from the critically acclaimed singer/songwriter and could well be one of the finest that he has ever recorded. Consummate songwriting combined with his distinctive vocals and stellar performances make this one of his best. The CD is totally essential for all fans of quality songwriting and Enuff Z’Nuff. The title track has already appeared on the ‘Kiss On This’ Classic Rock magazine cover mount.

One of the most gifted yet underrated songwriters of our generation, Donnie Vie is best know as the main song writer and voice of ’90s pop sensations Enuff Z’Nuff. Their Atlantic Records debut spawned the hits “Fly High Michelle” and “New Thing”, regular favorites on MTV’s “Dial MTV” and both of which charted in Billboard’s Top 50. Over their 25 year career, Enuff Z’Nuff has produced a discography of 16 international releases, been invited and played on Late Night with David Letterman (2 times), become Howard Stern’s favorite band, and toured the world over and over again. You can still hear their songs on Sirius/Xm Radio EVERY DAY!