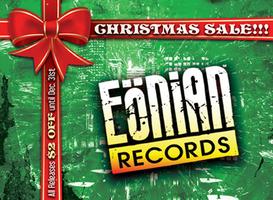 From December 19th until December 31st, each of Eonian Records first ten titles will be marked down $2.00! This is a holiday special only and will end before the clock strikes mid-night on the 31st! To take advantage of this special visit the Rockshop at www.eonianrecords.com. Eonian Records is synonymous with some of the greatest metal, pop and hard rock music in the world. Eonian’s new found reputation has been further cemented as they have become the home of several musical icons of Chicago’s legendary music club The Thirsty Whale such as Dear Diary, Gynger Lynn, Pistol Dawn, Sgt. Roxx, Sweet Sybil, and UZI. Eonian also has a growing reputation as an artist-focused home and is soon to lead the pack with the most acclaimed acts and recordings in music.

CHARLEMAGNE
Charlemagne reminds us today, with songs like ‘Secret Romeo’, of an earlier time where the music was fun, felt good, and rock stars were really rock stars. A roller coaster ride, ‘I Don’t Wanna Lie’ draws you in, pulls your heartstrings one moment and shredding them up the next, leaving you breathless. Like lipstick and stilettos, Charlemagne will keep you totally mesmerized, and never disappoint. The band was looked at by every major label in Hollywood but unfortunately the band was never signed to a multi record contract and the songs have been locked away in a vault, until now!

HIGH NOON
“No Turning Back” is THE chronological overview of High Noon, featuring straight ahead gut wrenching tracks produced by Michael Lardie of Great White and mixed by the legendary Michael Wagener (Skid Row, Dokken, & Extreme.) Songs like “Who Do You Think You Are” fulfill with that hard pounding, powerhouse sound, while “Just Like a Woman” displays a million vocal reasons why High Noon is nothing less than a rock machine …so take over the steering wheel and drive!

GYNGER LYNN
Once the object of a “signing war,” Gynger Lynn lands hard on both feet here with their debut, self-titled release for Eonian Records. Armed with songs like “Reasons Why,” a seductive power ballad complete with haunting vocals and crying guitars and “Tell The World” its upbeat counterpart love-song that most girls wish was written for them, they bring it all home with their signature sound in “I Love The Lights,” the hard-hitting screaming anthem for a generation of musicians.

PISTOL DAWN
Featuring tracks produced by Chip Z’Nuff, this is the album fans of Pistol Dawn have been begging for! From the raw-edged title track, ‘Conversation Piece,’ to the harmonic intertwining of vocals and guitar showcased in ‘Still Running Wild,’ this compilation of “dirty power pop” songs captures and delivers Pistol Dawn at their loudest and proudest with just a peek at their tender side. This highly anticipated release is not for the faint-hearted.

UZI
UZI was influenced by the metal rock wave ridden by bands like AC/DC and Motley Crue. Their debut, a collection full of razor guitars, piston-powered drums, and sleazy-pop hooks, displays ten extraordinary songs unleashing a barrage of swagger. “American Dream” and “Rocker” are soon to be classic metal anthems. Title track “Madhouse,” arguably the album’s best song, will raise blood pressure after just one listen. “Away From My Heart,” one the band’s strongest songs, undoubtedly rivals any rocker ballad by GNR, Motley Crue, or Skid Row.

SHAKE CITY
Featuring twelve sleazy, ear candy tracks produced by Tommy Thayer (Black ‘N Blue & Kiss) and Erik Turner (Warrant), this is the album fans of hair metal have been screaming for over 20 years! According to the band, all they ever wanted to do was satisfy their fans by serving up the kind of songs that made you pump your fist and shout, “Hell yeah, that f**kin’ rocks!” With the hooks and the looks and the sound to astound, this highly anticipated release is Eonian Record’s proudest moment!

FELONY
Representing their unbridled lifestyle and way of performing, the term “Helltown” has become synonymous with all things that are Felony. The band were touring giants as they attracted a loyal following and sold out legendary hot spots throughout the Midwest and all over the country including the Troubadour, Ritz Music Hall, Razzmatazz, The Loft, Bentley’s, Zanie’s, Sudsy Malone’s, and The Vogue amongst others with the record’s signature track ‘Heist in Helltown’ being perhaps the band’s most recognizable hit. Nearly 20 years later, the buzz surrounding Felony still remains.

STRIKE TWICE
Strike Twice was created by vocalist Michael Hayes and guitarist Rob Luv, two guys with a love in their hearts and souls for hot-blooded hard rock. Fate smiled kindly on them during the 80s hair-metal revolution as they packed out clubs everywhere they went, including Hot Rock, Sundance, and Club Loaded. Their tight, sleaze-fueled sound and debauchery-drenched stage show struck a chord with a cross-gender audience, appealing to men and women in equal numbers. Their music was powerful and precise, their songs designed to deliver hook-heavy entertainment.

SGT. ROXX
In 1990, the Chicago Rock Scene was drunk on Metal and fast becoming a major breeding ground for new bands on the rise. SGT. ROXX had arrived and everyone took notice including every major label! There was a little hint of every major influence of the time from the full-bodied meshing of guitars of Lillian Axe, the dangerous and dirty edge of Ratt, to the dripping sleaze of Motley Crue. Their sound took from everything and imitated no one, becoming something entirely unique, delivering something special and different to everyone that listened, and many did and still do.

DR. GRIND
Dual guitars, fast and intricate with crushing riffs and off-time beats; leaving an indelible impression; McCabe, provides the finest drumming to be found anywhere; the bass work is excellent and Allen at his best sounds menacing, angry, brutal, and melodic, often in the same line. This is one of the most complete, stunning releases in metal. Dr. Grind’s “Speechless” is a force to be reckoned with. If you don’t have a copy of this album, the only appropriate comment is “Why the hell not?”