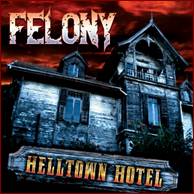 Eonian Records is pleased to announce that both the Felony and Strike Twice releases will be available at nearly every online music store that sells true rock-n-roll, as well as in the Eonian Record’s “Rock Shop” at www.eonianrecords.com. Also, THANK YOU to all of you music fans who purchased SHAKE CITY and UZI! Eonian Records sold out of the first pressing of these two titles in just the first week and both CD’s have been top sellers at many online retailers world-wide!

FELONY – In an era where many “great” artistic wells seem to be starting to run dry, FELONY bursts out of the proverbial rock’n’roll gate like thoroughbred race horses from hell. The proverbial torch-bearers of the Midwest metal scene, this powerhouse dates back to 1989 and the second great sexual revolution of our culture. ‘Helltown Hotel’ documents plenty of attitude and gives us an unobstructed view of the evolution of FELONY from their earlier no-frills metal sound, with songs like the blood-pumping ‘Yank That Chain’ to songs like ‘To The Core’ which chronicle the darker, heavier version of the later day. Representing their unbridled lifestyle and way of performing, the term “Helltown” has become synonymous with all things that are FELONY.

STRIKE TWICE – Strike Twice was created by vocalist Michael Hayes and guitarist Rob Luv, two guys with a love in their hearts and souls for hot-blooded hard rock. Fate smiled kindly on them during the 80’s metal revolution as they packed out clubs everywhere they went. Their tight, sleaze-fueled sound and deb auchery-drenched stage show struck a chord with fans everywhere. Their music was powerful and precise, their songs designed to deliver hook-heavy entertainment. STRIKE TWICE played their music displaying a killer knack for crafting punchy, high-energy hard rock songs that drip with streetwise swagger and bad boy shock factor. Never settling for second best, STRIKE TWICE gave it all they had, a well-oiled hair metal machine that delivered the goods to hungry hard rockers. With ripping tunes like “Tango,” “D.F.W.M.,” and “Undress Me,” STRIKE TWICE proves beyond any doubt that they possess that indefinable hard rock magic that is still as relevant today as it was in the late 80’s and early 90’s! 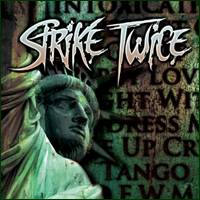