KISS fans are in for a treat as former KISS drummer Eric Carr‘s solo album Rockology, which was originally released on CD back in 1999, is going to be available on limited edition colour vinyl with the album going on sale on October 12, 2019.

The following message was posted on The Rockologists‘ Facebook page back on September 24, 2019 (with slight edits): 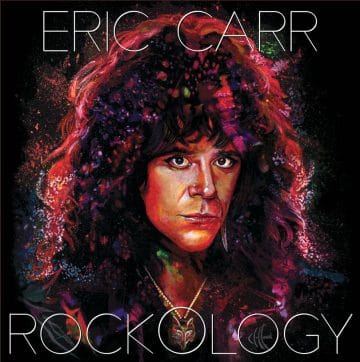 “LETS CELEBRATE WITH A LEGEND.

The Rockologists, in conjunction with The Eric Carr Family and Bruce Kulick are proud to announce that Rockology, formerly available only on CD will be available on presale Saturday October 12th in three exciting variations. There will be versions available for all levels of Eric Carr and Vinyl LP fans.

The Standard version will be pressed on Orange vinyl. In addition to all of the great demo’s from Eric Carr with assistance from Bruce Kulick, it will include a four page Booklet full of rare photos and liner notes, an exclusive hype sticker, Standard version Rockology card and an Eric Carr merchandise sheet. A bonus Rockheads collector card will be included in the shipping container. The standard version will sell for $28.99, and will be limited to only 500 copies.

While the Standard version will be an awesome addition to any Eric Carr fan’s collection, The Rockologists trademarked “RockRelix” versions are going to introduce a bonding level for fans and artists never before seen.

“RockRelix” Version One and Version Two will both be pressed on a stunning Orange, Black and Silver Starburst vinyl and will include a Custom OBI, custom hype sticker, four page Booklet full of rare photos and liner notes, a “RockRelix” version Rockology card specific to version one, a Rockheads collector card, and Eric Carr Merchandise sheet. Each of the two version will be limited to only 250 copies total.

In addition, Both “RockRelix” versions will include an extremely limited The Rockologists “RockRelix” card containing personal items owned by Eric Carr.

The Rockologists “RockRelix” Card Version I will contain an actual piece of the shirt that Eric Carr was last photographed in public wearing to the MTV Music Awards show. The fabric sample is authenticated by The Rockologists and Eric’s sister Loretta Carr. The hype sticker on Version I will specify the matching card contained inside.

The Rockologists “RockRelix” Card Version II will contain an actual slice of an Eric Carr KISS era rehearsal drumstick. The drumstick sample is authenticated by The Rockologists, Bruce Kulick and Eric’s sister Loretta Carr. The hype sticker on Version I will specify the matching card contained inside.

Randomly inserted in “RockRelix” Version One and Version Two will be three “RockRelix” Card Version III. These three chase cards will contain cut signatures of Paul Caravello. The Rockologists always provide 100% authenticated in person autographs in our releases, and these signatures authenticated by Lorretta Carr continue this tradition.

A limited bundle will be available for the first day of sales. The bundle will include copies of The Standard version, “RockRelix” Version One, “RockRelix” Version Two, a promo 8×10 photo, and a Rockologists LP bag to hold all the items. The Bundle will be limited to 50 sets, which will only be available for the first 24 hours of the presale. Once 24 hours has elapsed any unsold bundle LP’s will be returned to inventory and will be available for individual sales. The bundles will sell for $179.99, the cost of the LP’s if purchased individually.

Exports outside of the USA will include multiple shipping choices for customers, including for the first time from The Rockologists, First class shipping. Customers choosing First Class shipping do so with the understanding they have no insurance or tracking. The Rockologists will not be responsible for uninsured or untrackable shipping choices customers make. That means a lower shipping cost for customers, but absolutely no refunds for lost or damaged shipment.

Shipping from the pressing plant is expected to occur in mid to late December. Please keep in mind that it is not likely that delivery can take place before Christmas.”

Lipstick Generation recently released a video for their cover of Carr‘s song “Eyes of Love” which appears on Rockology.