Eric Martin feels Mr. Big’s hit single “To Be With You” is the gift that keeps on giving

Mr. Big frontman Eric Martin was recently interviewed by Marcelo Vieira for Brazil based Marcelo Vieira Music. Mr. Big‘s breakthrough album Lean Into It celebrated its 30th year anniversary last year and Martin was asked how he feels about the record and how important it has been to his career and still to this day. Martin replied (as provided by Vieira): 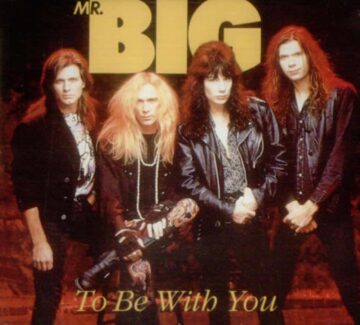 “My children used to call that “The hat and shoes album” [laughter]. The stock answer that I’ve always answered is that it put stamps in my passport, put food on the table. My kids, two twin 17-year old boys, they don’t have to worry about it [laughter]. They better worry about it, they better get a job, but college, university, [it’s] taken care of, and that means a lot from the financial aspect of Lean Into It. But my heart is just so heavy on the Lean Into It album because it’s the best thing that ever happened to me and still is to this day.

That little song “To Be With You”, which was at the end of the record, was the gift that keeps on giving. It’s allowed me to travel anywhere. I don’t even need my passport, I just show “To Be With You” and Lean Into It and they go “Oh, come on into the country” [laughter], almost like that. I’m the luckiest man alive. Musically, [it’s a] great sounding record. I listen to a lot of records and I like all the records Mr. Big has, but something about that record just clicks because all the songs were… You know, it’s hard to pick the songs for a record and it’s even harder to even put them in order, and everything worked out so well that… like, everytime we did a record, wherever the set order was on the album, we would do that live, but it clicked so much on Lean Into It. “Daddy, Brother [Lover, Little Boy (The Electric Drill Song)]”, “Alive and Kickin'”, you know, it just went… “Green-Tinted Sixties Mind”, and “To Be With You” in the end, state-of-the-art record. I pat myself on the back because I think it’s one of my favorite records, or is my favorite record that I’ve ever sung before. I’ve sung a lot of great songs with Mr. Big and I know people are going “My favorite is “Shine'” or stuff like that, but “To Be With You” are my favorite vocals of all time for me. “What kind of singer are you?”, and I’m like, “Listen to this.” I’m so proud of this moment to share with you. This is me. Yeah, sure, “Daddy, Brother”, “Addicted To That Rush”, yeah, that’s me, but… that’s me.”

You can check out the interview with Eric Martin in the Portuguese language at Marcelo Vieira Music‘s website.