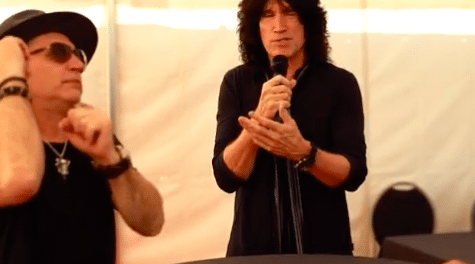 KISS drummer Eric Singer and lead guitarist Tommy Thayer were recently interviewed by Oklahoma’s KATT Rock 100.5 radio station at the Sweden Rock Festival and the duo shared a humorous story about a bazooka stunt ending off badly during the pair’s solo during a KISS concert a few years back. 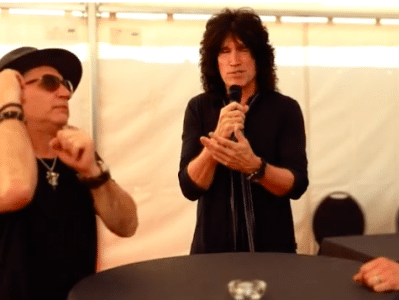 Thayer stated (as transcribed by Sleaze Roxx): “Here’s the greatest story though. Back, a few years back, one of our effects was Eric would do a drum solo and actually, we did a solo together where I shoot a rocket and he had this kind of torpedo thing [Singer demonstrates and states “bazooka”] — a bazooka — so one night, Eric, he gets that bazooka up there, boom! And it goes off backwards. He had the bazooka turned around the wrong way and almost shot himself. Ha ha!”

Singer added: “The drum tech would hand me the bazooka every night and he handed it to me a certain way knowing so knowing that I grab it and go like this [motioning grabbing it one way, doing a 180 turn and placing it on his other shoulder]. I’d be standing on my drums, on top of the drums. For some reason, I don’t know why. I turned around and grabbed it, and turned it around backwards. And he’s pulling on my leg saying ‘No, no’ [motioning gestures from drum tech]. I’m like this, ‘Get out of here. Mind… Like mind your own business.’ I go like this ‘Boom!’ It, it shot backwards and it hit. He knew it was coming so he moved out of the way.”

We met up with Eric Singer and Tommy Thayer from KISS and talkesd about the show and if they ever get scared of the pyro? And is this actually their last tour?