Eclipse frontman Erik Mårtensson was recently interviewed by senior columnist Alexandra Mrozowska for Hardrock Haven. Mårtensson was promoting the release of Eclipse‘s first live CD/DVD Viva La VicTOURia, which was released via Frontiers Music Url on November 6, 2020. Mårtensson is also the guitarist in a number of bands and notably in W.E.T 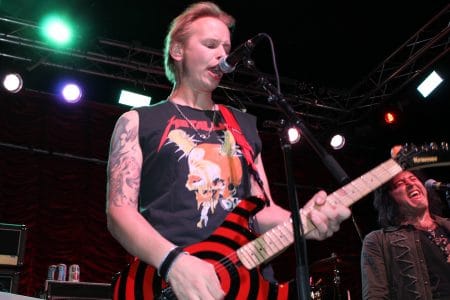 In terms of whether Ammunition is on hold with the Wig Wam reunion, Mårtensson indicated: “Yeah, it’s been on hold for quite some time now. I don’t know… Åge [Sten Nilsen] has been releasing a lot of solo records and he’s been all over the place. I think [Ammunition] is on hold until sometime in the future… To be honest, I have no idea about when and if. I think time will tell. The band hasn’t split up or anything, it’s just that we did the last gig and we said goodbye and then everyone went into their own direction.”

In regard to whether there are any plans for Nordic Union taking into account Atkins‘ stage four cancer diagnosis, Mårtensson stated: “Not really. We’ve been discussing it of course, and I contacted him a few times on a more personal level, asking how’s everything is with him and stuff. Let’s see what happens, but there are no strict plans of putting a new Nordic Union. Let’s see how his health develops. It’s the most important thing.”

You can read the rest of the interview with Erik Mårtensson by Alexandra Mzorowska at Hardrock Haven‘s website.

Nordic Union‘s “Because of Us” video (from album Second Coming):