Eclipse frontman and Ammunition, Nordic Union and W.E.T. guitarist Erik Mårtensson was recently interviewed by Music Radar and spoke about writing songs for his various bands. 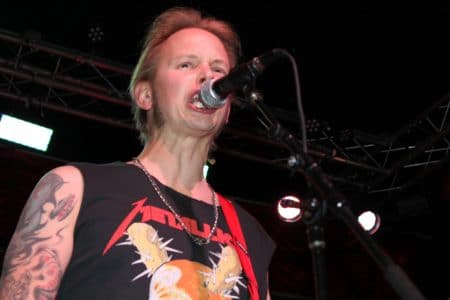 Mårtensson opined: “I think it’s easier to write for Nordic Union, because it’s not my band. It’s not Ronnie‘s band either – it’s something in the middle, and I think it’s the same when I write for W.E.T. If the song is good, that’s enough. A great song is all it takes… When it comes to Eclipse, we have so many [rules]: ‘We can’t do this; we can’t do that’ – but it’s more open with Nordic Union. I’m usually more open-minded while writing, so that makes it easier. [Also,] I can send over the vocals to Ronnie, and he’ll make it perfect. In some sense, I guess it’s easier to write for Nordic Union, but it doesn’t mean I don’t put in as much effort – I still put in just as much effort.”

In terms of whether he starts by writing a riff, melody or lyrics when writing a song, Mårtensson advised:”It can be anything. Usually, the hardest part is to find that initial spark of inspiration. It could be when you come up with a melody for a verse, and then you have something to build on. It’s like the first brick in the wall… I always try to make the chorus [memorable]. The worst thing is when you listen to a song and the chorus comes, and you didn’t realise it was the chorus. I try to avoid that on my songs. When the chorus kicks in, you should really hear it – even if you don’t like it.”

You can read the rest of the interview with Erik Mårtensson at Music Radar.