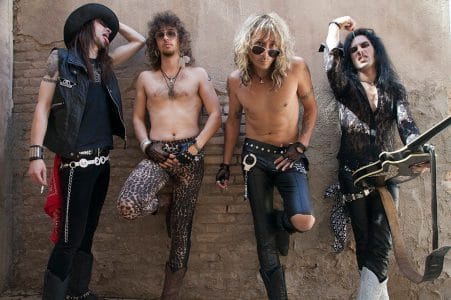 Sleaze Roxx‘s review of Sex You Up included: “Drawing from influences such as Faster Pussycat and Pretty Boy Floyd (intentionally or not there seems to be a nod to Pretty Boy Floyd with their lyrics ‘Four electric boys gonna make some noise’ on their 2014 debut video “Lost Boyz”) while maintaining a step past Floyd’s bubblegum pop element.”

After the release of their first EP Sex You Up! (2015) and three videoclips, which are full of attitude and sleaziness (“Lost Boyz,” “Psycho MF” and “Sex Me Up”), the band made a stand on its musical direction, leading to the purest Californian sleaze/glam sound, but building its own style. Their first EP allowed them to get some popularity in their country and social networks, offering a great number of performances, including a highlight gig at Leyendas del Rock Festival 2016. They also got distribution in the USA by Demon Doll Records and very good reviews and new fans every day.

The band is now in the making of their second record, this time a full-length LP, The Lost Boyz.

Here’s a link to the site where you can find out about all the rewards, you just have to get in and choose the one you like most: http://vkm.is/thelostboyz