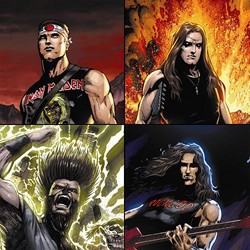 An unholy alliance has long existed between the worlds of heavy metal music and fantasy comics, but multi-media phenomenon Eternal Descent marries the two mediums and takes them to their absolute zenith as never before.

Fast-becoming a global underground sensation, Eternal Descent immerses fans in a dark fantasy world where demons and angels battle for supremacy alongside some of the biggest names in metal from renowned bands such as Atreyu, Firewind, Static-X and Shadows Fall.

The brainchild of British guitarist and comic creator Llexi Leon, who has recently teamed with American animation veteran Shaun McLaughlin to bring his unique artistic vision to fruition, Eternal Descent is set in a fantasy universe where lost souls lurk in every shadow, darkness veils sinister designs and heavy metal could be the key to salvation… or the gateway to destruction!

Eternal Descent features a fallen hero, a twisted demon, a gorgeous succubus and an army of chart-topping guitar heroes such as Gus G, Wayne Static, Jon Donais and Dan Jacobs who all collaborated on the title and feature in the comic after being astounded by Eternal Descent’s epic storyline and stunning visuals.

The creators are set to shortly announce another wave of world-renowned Heavy Metal icons who will be incorporated into the Eternal Descent universe.

Set to become a 21st century cult classic, fans of comics and heavy metal alike will be staggered in the scale of Eternal Descent’s ambitions and should ready themselves to fall feet first into its dark, multi-faceted world.