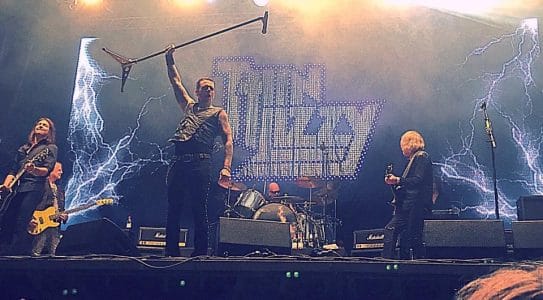 Haugland posted the following message on his Facebook page as a musician on August 7, 2016:

So now it’s done, yesterday i went onstage as the drummer of Thin Lizzy at the Skogsröjet festival!

We basically had one rehearsal before the show, so of cause i was a wee bit nervous!

Even thou i’ve been listening to all these songs since i was a teenager, and know them inside out, it’s still a totally different thing to “step inside” the music and become a vivid part of it.

The first part of the show i felt like i was in a different universe, it was simply an unreal feeling! I had memory flashbacks from 1977 when i was a thirteen years old boy, and saw Thin Lizzy in Sweden for the first time.

If someone would have said back then “boy… in 40 years you gonna play drums with this band” i would have laughed myself to death, now it was actually happening!

Unfortunately it was over too fast as all good things usually are, but from now on i can stand straight and say that i’m part of the Thin Lizzy history… A true bucketlist moment!???

Thin Lizzy playing “Whiskey In The Jar” live at  the Skogsröjet Festival in Sweden on August 6, 2016:

A video of Thin Lizzy (Anniversary Shows) performing “Whiskey In The Jar”, live at Skogsröjet, Rejmyre, Sweden on August 6th 2016.