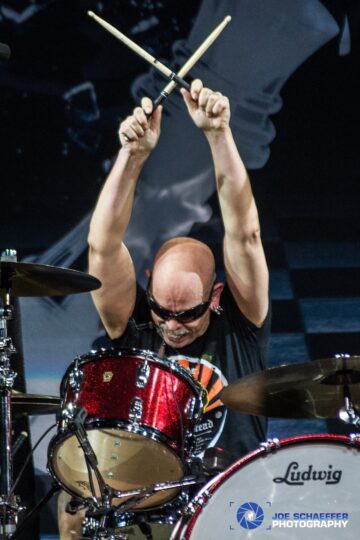 Haugland was asked about auditioning for Yngwie Malmsteen back in 1982 to which he stated (as transcribed by the 80’s Glam Metalcast podcast with slight edits):

“I was looking for a gig and I saw a flyer that Yngwie Malmsteen’s Rising Force was looking for a drummer. I went there for a jam and it was just Yngwie and Marcel Jacob on bass. It was this shitty rehearsal area, there was trash and stuff everywhere. There were two Marshall stacks and a tiny little shitty drum set in the corner. We jammed on a couple of Rainbow songs. When we were done, Yngwie said I was great and we wanted me to join the band. But during this jam, Marcel and Yngwie had been fighting and screaming, trying to play louder and faster than each other. They were fighting like a cat and a dog… So I didn’t take the gig. Yngwie got really pissed off about it. Years later in 1987, I saw him at a bar and he was totally fucked up. I asked if he remembered me and he was like “it’s you, the coward that didn’t want to play with us”. Five years later, he was still mad about it!”

In terms his favorite Europe album, Haugland opined: “It’s hard to say because there are great songs on all the albums. I tend to gravitate toward Prisoners in Paradise. I think it’s because that album was shoved away, it was released right around the time Nirvana came around. Despite grunge, that album sold quite well in Sweden and Scandinavia. I think the album sold around one million [copies] worldwide. That’s pretty good compared to today’s standards. The problem was the label didn’t want to push it. It was kinda unfair, but it happened to most bands like us at that time. We were just burnt out that time as well. We had problems with the management and we had been touring non-stop for so many years. So we needed that break after Prisoners in Paradise.”

You can listen to the interview with Ian Haugland on the 80’s Glam Metalcast podcast below: