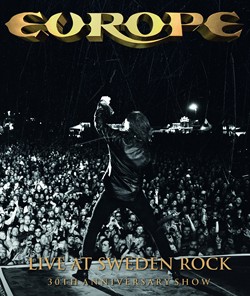 Europe will release a live DVD entitled ‘Live At Sweden Rock – 30th Anniversary Show’ on October 16th. The collection will include over two hours and fourty minutes of concert footage, behind the scenes material, and an exclusive interview with the band — making this the definitive Europe live DVD.

This concert, which was captured at Sweden Rock Festival on June 7th, 2013, is not only a massive greatest hits show in front of 30,000 people, it also marks the 30th anniversary of the bands existence. They celebrate this by playing 28 songs spanning their whole career including songs never before performed.

Between the heavy rock songs Europe also sit down for an emotional accoustic set which brings a unique intimate feel to this otherwise massive arena show. To pay tribute to their own heroes they invite legendary guests artists Scott Gorham (Thin Lizzy) and Michael Schenker (UFO, MSG) to join them on stage.

Europe has made nothing short of a remarkable return since they started up again in 2004. Their latest album ‘Bag Of Bones’ was awarded the 16th best rock album in the world by the prestigious Classic Rock Magazine in 2012 and according to Sleaze Roxx contained, “More infectious riffs than many guitarists would crank out in a lifetime, a rhythm section that swings as much as it thunders, and a vocalist that delivers passion, authenticity and a range of tones that make each and every track a killer.”

Together with the four latest CD releases to come out this side of the millennium and the five albums they produced in the eighties and nineties, Europe sit on an enormous song treasure.

‘Live At Sweden Rock – 30th Anniversary Show’ will also be released as a Blu-Ray and live CD.

The DVD includes songs like: Seven doors hotel, Open Tour heart, Rock The Night, Carrie, Superstitious, Prisoners in Paradise. Always the pretenders, Last look at Eden, New love in town, Not supposed to sing the blues, Firebox, Lights out (with Michael Schenker), Jailbreak (with Scott Gorham) and many more.