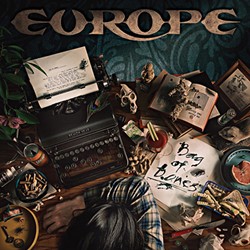 Europe Set To Release ‘Bag Of Bones’ In April

Swedish rockers Europe will release their latest studio album ‘Bag Of Bones’ on April 18th in Japan and April 25th in Europe through earMusic/Edel. Produced by Kevin Shirley (who has worked with Iron Maiden, Joe Bonamassa, Black Country Communion, Black Stone Cherry, Journey and many more), ‘Bag Of Bones’ represents the band’s nith studio album and first since 2009’s ‘Last Look At Eden’.

Says Europe drummer Ian Hauglund regarding the new CD, “I just heard the final mixes of B.O.B… It’s just amazing, so powerful, dynamic, soulful, alive. It’s by far the most rockin’ album in the history of the band. If you could run Led Zeppelin, Deep Purple, Thin Lizzy, UFO and Rainbow in a kitchen blender, spice it up with the sound of 2012 and make a smoothie out of it. It would surely taste like B.O.B.”

The new material suggests a more straight forward rock approach evident in “Doghouse”, a new song Europe performed on their recent UK tour. The song is also featured on the band’s ‘Europe: Live at Shepherd’s Bush’ DVD, released in August 2011 on earMusic CDs and DVDs.

Nordic customers can pre-order a signed copy of ‘Bag Of Bones’ by visiting www.bengans.se.