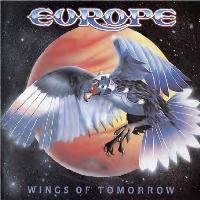 On January 25, 2010 Lemon Records will reissue Europe’s ‘Wings Of Tomorrow’ to coincide with the bands February 2010 UK tour.

Europe’s second album, originally released 25 years ago, was a major stepping stone on the way to worldwide fame with The Final Countdown. ‘Wings Of Tomorrow’ will be newly re-mastered with extensive sleevenotes and period photographs/memorabilia.

The CD features the original version of the hit single Open Your Heart as well as further single releases Stormwind, Dreamer and Lyin’ Eyes.

Lemon Recordings is home to the best in classic rock and new wave albums from the 70s to the present – featuring rare archive classics, quality re-issues and previously unavailable albums and DVDs from established bands and artists! Established in 2003, Lemon Recordings goes from strength to strength, boasting some of the biggest names in Rock history.