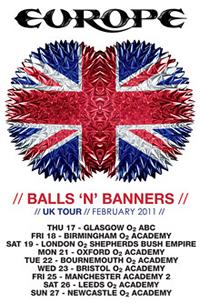 Academy Events and the Gig Cartel in association with The Agency Group are proud to announce Europe’s ‘Balls ‘N’ Banners’ UK Tour 2011. Hot off their knockout performance at this year’s iTunes Festival in London, and leading up to their appearance at this year’s Sonisphere Festival, Sweden’s biggest hard rock band will undertake a nationwide UK tour in February 2011.

A special pre-sale for Europe fans will happen on Wednesday 28th July, followed by tickets that will go on sale to the general public from 9am on Friday, July 30th.

The tour follows last year’s critically acclaimed new studio album ‘Last Look At Eden’ which features the single ‘New Love In Town’ and the majestic title track. Europe vocalist Joey Tempest states: “We’re gonna bring something very special when we return to the UK in february 2011. We’re having the time of our lives right now and the audience will experience a Europe camp thats on fire!”