Memphis, Tennessee, USA rockers EMN (Every Mother’s Nightmare) have released an album teaser for their upcoming new studio record Grind, which will be released via HighVolMusic on October 6, 2017.

Drummer Lonnie Hammer says “Recording ‘Grind‘ seemed effortless and the whole process came very naturally for the band. Sometimes while recording an album it can get frustrating, like trying to put a round peg into a square hole. This album just flowed through. All the guys did what they do best and we put together a record that has become a monumental part of all our lives.”

‘Grind‘ contains 11 tracks which include 5 from the band’s self-released EP, three new studio tracks, and three live tracks recorded during a performance at Minglewood Hall in Memphis, Tennessee. The enhanced CD also includes the videos for ‘Loco Crazy’, ‘Blown Away’, and the new video for the track ‘Push’. ‘Grind‘ is the first full-length release since 2002’s ‘Live Songs From Somewhere‘.

‘Grind‘ is set for an October 6 release and will be distributed in North America via MRI/Sony, Europe via Cargo, iTunes and all digital platforms. Pre-order begins September 1st….” 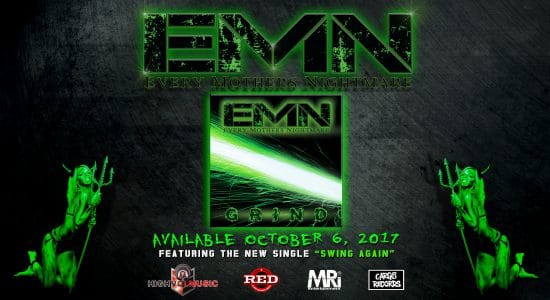