California rockers Evolution Eden consisting of lead vocalist and lead guitarist Brandon Owen, lead vocalist and guitarist Mike “Pap” Pappas, bassist Mike McShane and drummer Brian Powell have unleashed a video for their single “Kiss Like Summertime” from their new studio album Audio Therapy, which was released via Ravager Records on March 20, 2020. You can pick up Audio Therapy via Hair Band Heaven‘s website. 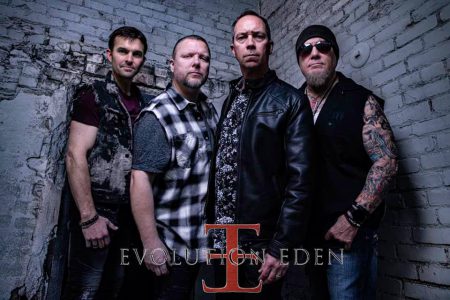 “Evolution Eden releases our first official music video for the new summertime song, “Kiss Like Summertime.” We worked with Mike Sloat who has directed videos for Lynyrd Skynyrd, Machine Head and Testament to name a few. His vision was perfect, catching the vibe of the song and we think everyone will love it.

With Audio Therapy, Evolution Eden has managed to create a lethal cocktail of hard rock, power pop and blues that when mixed together goes down smooth but will definitely give you the buzz you crave. There’s a familiarity to the band’s sound as they clearly draw upon their classic rock and heavy metal influences, while adding their own touch to make it fresh and distinct.  The band consists of the tag team fronted duo of lead guitarist / vocalist Brandon Owen and rhythm guitarist / vocalist Mike “Pap” Pappas, and the power house rhythm section of bass guitarist / backing vocals Mike McShane, and drummer / backing vocalist Brian Powell. If you are seeking some serious rock and roll that will soothe your soul, some Audio Therapy from the new version of Evolution Eden is sure to be just what the doctor ordered.”