Will former AC/DC lead vocalist Brian Johnson be singing on the band’s next album? 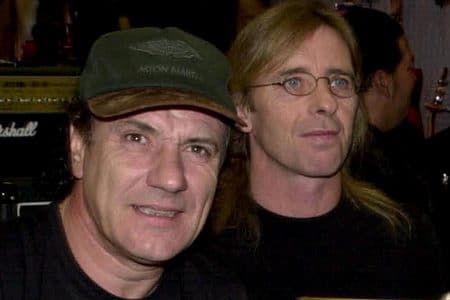 That is indeed the question as one day after Steve Newton from The Georgia Straight reported that AC/DC members Axl Rose (lead vocals) and Stevie Young (rhythm guitar) along with former member Phil Rudd (drums) had been spotted in Vancouver, British Columbia, Canada where the band had recorded its last three studio albums, Rock Or Bust (2014), Black Ice (2008) and Stiff Upper Lip (2000), Rudd and Johnson were spotted together at The Warehouse Studio in Vancouver where those three albums had been recorded.

Newton from The Georgia Straight has reported that Rudd and Johnson were photographed sharing a laugh on an outside deck linked to The Warehouse Studio.

The following is an excerpt from The Georgia Straight article:

“Vancouver resident (and hardcore AC/DC fan) Crystal Lambert has an apartment located near Warehouse Studios in Gastown, and she and longtime friend Glenn Slavens have been keeping an eye on the studio’s outside deck, where various band members seemingly retreat to get some air, use the barbie, and drink coffee (or perhaps Jack Daniels) from white mugs.

As you can see from the above photo, taken by Glenn two days ago, Rudd appears to be sharing a laugh with none other than Brian Fucking Johnson!”

You can read the rest of the article at The Georgia Straight.