Former Accept guitarist Herman Frank was recently interviewed by Andrew Catania for All That Shreds with the guitarist’s latest solo album Fight The Fear about to be released via AFM Records on February 8, 2019. 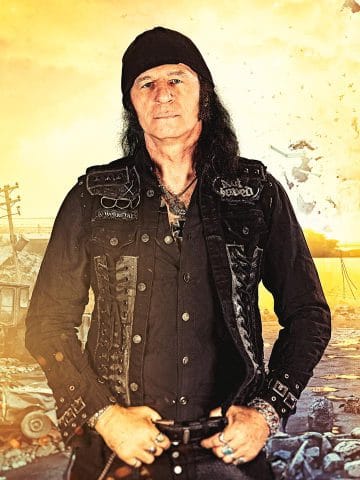 When asked whether he will ever tour in the United States of America, Frank replied (as transcribed by All That Shreds): “(Chuckling) That’s the thing, you know? it’s not just in the neighborhood. It’s getting tougher and tougher to go on tour in the proper way. I think we are at least, doing a couple of shows in Europe and we start in the middle of April. I don’t think that we will make it to the States.  It’s too far away and it costs too much. I mean if the album’s doing well, I would love to come back to the States.”

With respect to why he left Accept in 2009, Frank advised: “It was just time to leave the band. Let’s put it this way, I wanted to do music the way I started to. I wanted to have my own band. I wanted my own music and just wanted to just play my own leads. Not to follow somebody’s guitar.  I was getting too old for it. It’s fine to be a backup, but after a couple of years It’s time for a different thing.”

In regard to how current Accept singer Mark Tornillo is different from the band’s former lead vocalist Udo Dirkschneider, Frank opined: “Mark is a really nice guy and really promising. It’s kind of a different voice and Mark really doubles Udo in his personal way. I prefer the style of Udo’s singing. He is original Accept.  There is this voice sticking in your head. On the new songs, which Mark sings for the first time in Accept, it’s a different character, but it’s very good. You can’t compare them really. They are a match for certain things, but they are quite different people. I do like them both. I couldn’t have the decision which one I would prefer. It would have been great if they would put a couple of albums with Udo and Mark together. That would be awesome.”

You can read the rest of the interview with Herman Frank at All That Shreds.